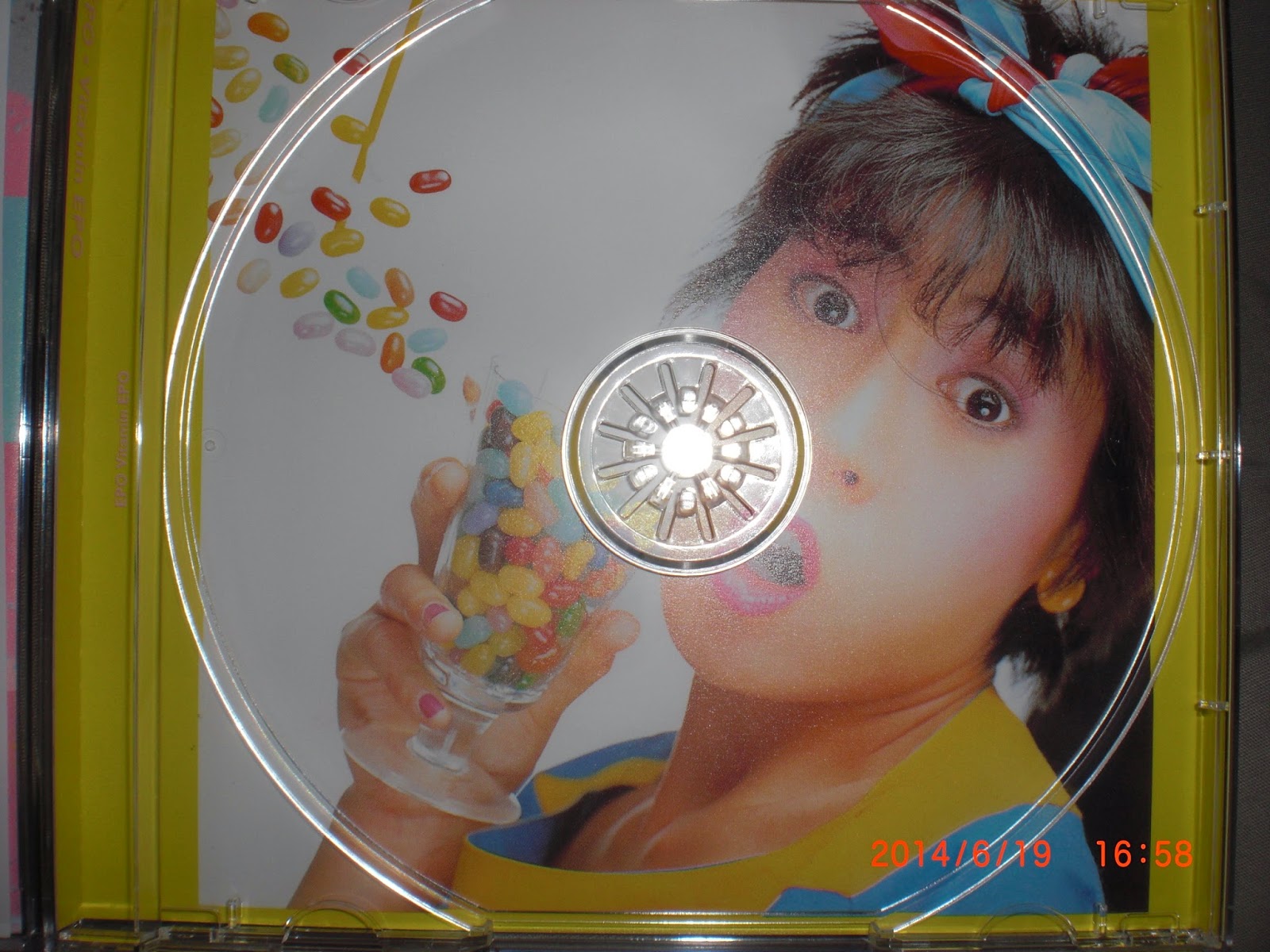 An interesting thing that I've found out about EPO (nee Eiko Sato) since I began this blog back in early 2012 is that she has her qualifications as a psychotherapist (according to J-Wiki) and has held counselling workshops (apparently centered around music) geared toward the young, the elderly and people with disabilities. If that side of herself reflects the music that I've known from her for decades, then her patients should be a pretty happy lot. I don't know much of her more recent output (she's released 41 singles and 22 albums since her debut in 1980 with her latest release happening just last year) aside from a duet with Asako Toki（土岐麻子）, but I've always remembered her as the City Pop Princess with the radio-friendly happy-go-lucky vocals hearkening back to my image of hot-and-shiny Tokyo during my Japanese language school summer trip in 1981.

"Vitamin E-P-O" carried on that sunny tradition as EPO's 5th album from April 1983. One of my latest purchases online, it contains her most well-known song, the kinetic "U, Fu, Fu, Fu" （う、ふ、ふ、ふ）as well as another famous single release, "Doyou no Yoru wa Paradise" （土曜の夜はパラダイス）which was one of the ending themes for popular Fuji-TV variety show, "Oretachi Hyokin Zoku"（オレたちひょうきん族）. All of the tracks were written and composed by the singer herself.

I think the album is aptly named since a number of the songs including the ones that I've already mentioned have that morning OJ quality to them. In fact, my favourite new song from the album is "Pay Day". It represents the hidden gems I've discovered in albums of various singers instead of just relying on their BEST compilations. Lyrically, it's a cousin to EPO's rendition of "Downtown"; it talks about looking forward to that great time in the city on a Saturday night, presumably after getting that latest pay pack from the boss. As they say in the States, it's Miller Time! Plus the music is cool and groovy, and I can honestly say that it's a song that only EPO could create. "Pay Day" has the EPO bright-and-high delivery along with a bit of her usual vocal gymnastics and the flashy guitar at the end, thanks to the arrangements by keyboardist/songwriter Nobuyuki Shimizu（清水信之）, her senpai from high school.

The title track and the song that starts the album off, "Vitamin E-P-O" is another quintessential EPO tune. This song I have heard a number of times before since although it had never been released as an official single, it has popped up on her BEST compilations. Whenever I hear it, I always get reminded me of those West Coast radio stations with those over-the-top DJs announcing the latest disco-pop song from the late 70s. It really does send the vitamins in and it has that EPO scatting.

Speaking of radio, the Track 8 ballad "Kanashii Tomodachi"（かなしいともだち...Sad Friend）, has a hint of some of the soulful love songs that I used to hear on AM and FM back in my junior high school and high school days as I tried to cram for some of those dreaded tests. In terms of the lyrics, EPO also managed to hit a spot since it was at that time when I heard about those one-sided crushes that a lot of kids went through with the good buddies providing those well-worn shoulders.

My last track to be featured tonight is Track 5 "Anata wo Ubaenai"（あなたを奪えない...Can't Steal You Away）. It's still very much an EPO song but it has a slightly different sound to it thanks to Kenji Omura's（大村憲司） arrangements. According to the liner notes, it's characterized as being a "college rock" song although I think it's more college pop. There is slightly more edge to this one with the singer going a bit lower in the voice and Omura himself manning the guitar which had me imagining some of the New Wave/pop-rock blends of the age in America. Perhaps she was channeling a touch of Olivia Newton-John or Pat Benatar.

I had a good time with "Vitamin E-P-O" and will continue to do so in the future. It's one of those albums that can do a pretty good job at chasing the blues away. And I have to say that the singer also had quite the thing for providing some colourful album covers. 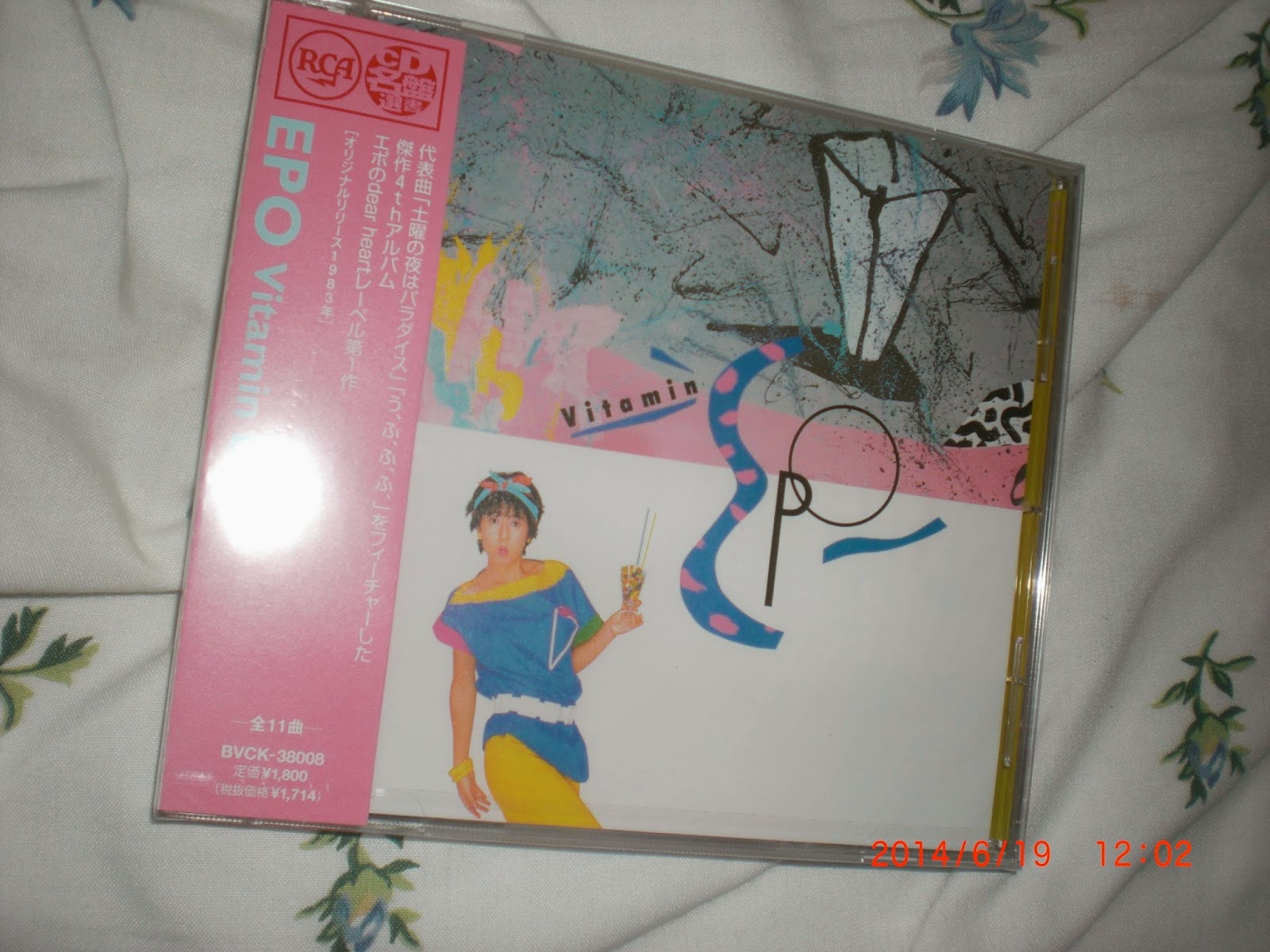