I've been reading some of the comments on YouTube that for a number of Anri（杏里）fans that "Sunahama" (Sandy Beach) is their favourite song by the veteran singer. For me, there are actually a few more ahead of this one that I like even better, but over the years, this particular ballad has grown on me. It wasn't ever an official single but was placed on the fourth of her BEST compilations, "Meditation" from November 1987.

"Meditation" just happened to be one of my first Anri purchases after arriving in Gunma Prefecture a quarter-century ago. Although at the time I hadn't realized it, the album of ballads has come to signify to me an ending of the second stage of the singer's career; that part of her career which largely involved her collaboration with singer-songwriter Toshiki Kadomatsu（角松敏生）. From the early to mid-1980s, a good chunk of her music (though not all of it) had a certain comforting AOR-friendly mellowness to it which always echoed the thought "Ah, yes...this is a Kadomatsu work". Once "Meditation" was released, Anri would then enter the funky American R&B genre with Yumi Yoshimoto and Yasuharu Ogura（吉元由美・小倉泰治）starting with "Boogie-Woogie Mainland" in 1988.

But going back to "Sunahama", this has become a nice and contemplative ballad about sitting on that beach as the sun goes down to think about the love lost. It can be considered to be a rather sad song but if I don't pay attention to the lyrics, I can just regard "Sunahama" to be a ballad to contemplate about life in general. And although I've never done it myself, I can imagine that sitting on the sand while the surf is rolling in and out can be quite hypnotically soothing. After all, the album title is "Meditation".


Now, according to sites such as uta-net and kasi-time where I go to check out the lyrics to songs, "Sunahama" was apparently written and composed by Kaoru（かおる）. I could only think that the one name was referring to Kaoru Ito（伊藤薫）who had created the early Anri hit "Cotton Kibun"（コットン気分）. But then I came across the above YouTube video of a cover by Anri's former collaborator Kadomatsu, and according to the J-Wiki article on his 31st studio album, "TOSHIKI KADOMATSU I", his cover of "Sunahama" is a self-cover from that very album which was released in November 2008. And the wonderful way he sings it with the lush orchestral arrangement can only make me think that he was the man behind it. But I will have to check things further by scanning through my copy of "Meditation". 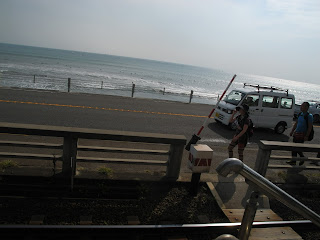