I still remain a Coca-Cola fan after all these decades although my intake has been curtailed somewhat since I returned to Toronto back in 2011. My imbibing of the quintessential drink for hamburgers and pizza (with the accompanying increase in gas afterwards) probably started right from the 1970s just when the famous US commercial campaign jingle for Coke, the hippie-folkie "I'd Like To Teach The World To Sing In Perfect Harmony" wormed itself into millions of pairs of ears. Yes, people linked hands for world peace in tribute to a drink that can most likely melt enamel and internal organs.


Many years later when I was in thrall to my Japanophilia, I learned that the Japanese were also in thrall to Coke. And a certain advertising company over there came up with a simple Japlish (or Engrish) catchphrase that has lasted for years: I Feel Coke. Not "I feel like a Coke". That would be too drawn out and grammatically correct. Just those three words.

And there was a jingle under the same title whipped up by composer/saxophonist Daisuke Inoue（井上大輔）for the campaign which began in 1987 with lyrics by Toshiya Mizoguchi（溝口大輔）. Unlike the world peace folkiness of "I'd Like To Teach The World To Sing In Perfect Harmony", "I Feel Coke" was all about happy happy fun fun even if it was during lunch break during a 12-hour day in Tokyo. And it was sung by soulful Chikuzen Sato（佐藤竹善）just at the time that his group Sing Like Talking was making inroads; couldn't have asked for a better calling card than his vocals here.


Although it was Sato's voice on the commercials, composer Inoue also had to get his two cents in with his own version, of course, with appropriate saxophone accompaniment. I think it's one of the few times that I've seen a yellow double-breasted suit work. Could be the lighting.


I only found out by accident but apparently Junko Yamamoto（山本潤子）of Hi-Fi Set also gave her own version of "I Feel Coke". As for Inoue, he was also behind songs such as "Hurricane" by The Chanels and "Taboo" by Hiromi Koide（小出広美）. 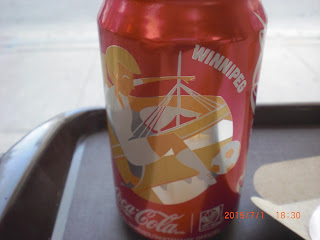