I had actually mentioned about "City Lights" by Fantastic Plastic Machine in my first article concerning FPM, "Electric Ladyland" all the way back in 2013, and was actually thinking about promoting it to full article. Well, fate was kind enough to lend a hand tonight. The original video had been deleted there so I decided to transfer the whole kit and kaboodle to a new page with the video re-uploaded.

Perhaps in a way I should have picked a more appropriate day of the week to feature "City Lights" since Monday night is hardly a great time to talk nighttime fun in the city. Friday or Saturday nights are far better but, hey, I might as well get it out of the way. The jazzy and snazzy song just flies at a mile a second thanks to that virtuoso saxophone fueling the ride through the Tokyo highways in the video above. It was featured in FPM's remix album "Contact" in October 2001.


I guess my affinity for the title can be explained by a couple of local Toronto TV shows I used to know. There was a fairly verbose celeb interviewer by the name of Brian Linehan who back in the 70s and 80s gained an admirable or irritating reputation depending on the interviewee in the way he asked questions. His show was called "City Lights" on City-TV, and Linehan basically rolled out a 1-minute preamble filled with encyclopedic historical knowledge on the celeb right in front of the celeb that he/she had thought was only known to him/her before the host finally unleashed the question. Below is his interview with James Earl Jones. If you have never seen a Darth laugh...

Also on City-TV, there was a late-night video show called "City Limits" (nope, not the same title but close enough) hosted by Christopher Ward which featured the more avant-garde, grungier and just plain weirder music videos from the 80s. I think "City Lights" by Fantastic Plastic Machine would have been featured just for the fact that it was an international video with some panache. 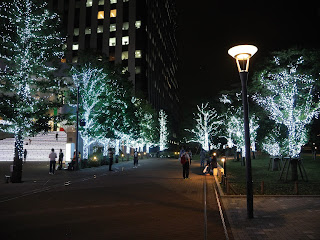