Quintessential Ruiko Kurahashi（倉橋ルイ子）. "Kanashimi no Ballad" (A Melancholy Ballad) is chock-filled with plenty of fortified ennui to fuel a short French movie. This was Kurahashi's 4th single from April 1983, and I think it's popped up on every BEST compilation that she's released.

There is that lonely piano starting things off before the singer's heart-achy vocals come into play. I realize that it might be a tad strange to call this a Mood Kayo, but Kisaburo Suzuki's（鈴木キサブロー）music sounds like a European take on the genre, and really, "Kanashimi no Ballad" isn't exactly a cheerful tune as the title would indicate. This would be the type of song to cry in your vin. Then there are Fumiko Okada's（岡田冨美子）lyrics which go into the protracted and perhaps agonizing final meeting before the end of the affair. Perhaps the soon-to-be former couple is wrenching its collective hearts but the man and woman are probably looking really beautiful. 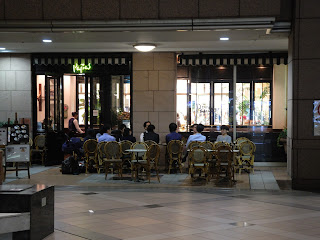