Whoa, this is one cool and manly song - thumping of the drums mixed with the shakuhachi/flute at the start, the sting of the electric guitar that soon follows which giving the melody a nice blend of traditional and modern, and Kouhei Fukuda's muscular and forceful delivery. I love the powerful manner in which he sings the, "Yume ga..." and "Oshite..." bits.

I managed to discover "Kadode" while watching the preparations the diminutive enka singer made for one of his concerts. When the rehearsal was being shown, this was the song he was singing and I enjoyed it very much. But of course, I hadn't yet known its title and went on a trial and error through the other videos that had clips of that concert, so I found it eventually. From the way Fukuda handled "Kadode", it had me thinking that it was one of his own works. Looking it up, however, proved me wrong. As it turns out, the husky Ikuzo Yoshi (吉幾三) was the original singer and he's the one behind the music I like. It was a bit surprising to note - I was able to recognize that the electric guitar part was something he'd add into his songs, the traditional start sort of threw me off - and because I'm so used to hearing Fukuda's minyo-esque version of "Kadode", it also took me a while to imagine Yoshi belting it out in a similar fashion.


Handling the lyrics was renown lyricist, Tetsuro Hoshino (星野哲郎), whom I know best for collaborating with Sabu-chan. From what I gather, our protagonist's life is no bed of roses and he seems to be struggling with all the problems he has to face, like his job, alcohol and women. Despite that he has bite the bullet and keep pushing forward. I read that there are two meanings the words "Kadode" from this really useful translation website, Jisho.org (thanks, J-Canuck!), and in this case I think the first meaning applies: "leaving one's own house (e.g. when going to war); departure; setting out". The part where going to war was mentioned was the one that got me thinking that perhaps our character feels that having to start a new day to face his burdens is like going to war since he isn't satisfied with his life.

"Kadode" was first released as Yoshi's 23rd single in 1993. I don't think it was very popular though, judging by the lack of his version online. Fukuda's cover was released recently in 2014 as a track in his cover album, "Kirameki" (煌). The album peaked at 20th place on the Oricon charts. 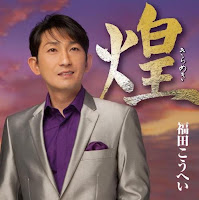 Apparently Fukuda is seen as the modern day equivalent of the late minyo star, Michiya Mihashi (三橋美智也). Can't argue with that. In fact it's appropriate since Fukuda has a background in minyo too.
Posted by Noelle Tham at 11:32 PM