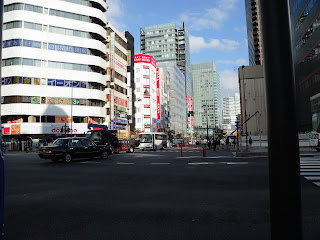 Love the song, love the cover! As for the latter, that is the cover for singer-songwriter Miyako Chaki's（茶木みやこ）1976 album "Tobenakunaru wa"（翔べなくなるわ...Won't Be Able To Fly）. Talk about a great photo to reflect City Pop of the 1970s...the singer in a denim outfit looking rather pensive as she sits in a chic drinking establishment, perhaps watching people and life go by.

J-Wiki has Chaki categorized as a folk singer, and perhaps she was earlier in her career, but this second track from "Tobenakunaru wa" is pure urban. "Chizu douri ni Hashirikitta Anata" (Running Behind The Map) sounds as the title reads: a sunrise intro followed by a speedy and soaring race through a Japanese metropolis. It's fueled by some funky keyboard and a great wacka-wacka guitar, and I would probably get the album on this song alone. Nobukazu Hioki（日置信和）provided the lyrics while Chaki came up with the fast-paced melody. Also love the instrumental bridge with the guitar and the sax, by the way.

Chaki was born and raised in Kyoto. While attending Doshisha Women's College of Liberal Arts, she and Kyoko Kobayashi（小林京子）formed a folk duo named Pink Pickles（ピンク・ピクルス）in 1970 which was so named after the shibazuke pickles from her hometown. Two singles and an album came out of the relationship before the duo broke up in 1972.
Posted by J-Canuck at 5:14 PM