For the first time in the history of this blog, I feel totally uncertain about the name of an artist or group. I believe the name of this Mood Kayo outfit is Akira Nakai-Sho Takahashi & Coloratino（中井昭・高橋勝とコロラティーノ）but the readings of the given names of the two leaders were giving me some fits, so if I offend any of the fans out there, forgive, and more importantly, correct me. One reason for the uncertainty is that the topic of this article is listed in J-Wiki but not the group itself...another first for me since it has often been the other way around.

In any case, "Shianbashi Blues" (Shian Bridge Blues), was the debut song by Nakai, Takahashi and Coloratino, and incidentally their only big hit, which was released in April 1968. Written and composed by Hiroshi Kawahara (川原弘...the trumpeter for Coloratino), it follows that tried-and-true kayo trope of some rather sad lyrics (another romantic breakup) accompanied by fairly more cheerful music. And within the enka/Mood Kayo genre, it follows the penchant of basing the song in some particular region within Japan; this time, it's Nagasaki. From what I read in the J-Wiki article for "Shianbashi Blues", the 1960s were a good decade for promoting the city in western Japan as ballads like "Nagasaki no Onna"（長崎の女）by Hachiro Kasuga（春日八郎）and the representative Mood Kayo for the city, "Nagasaki wa Kyou mo Ame Datta"（長崎は今日も雨だった）by Hiroshi Uchiyamada & The Cool Five became hits.

The romance may have been coming to a bittersweet end, but boy, was it ever nice to take that final stroll through Nagasaki including the titular bridge. Melodically speaking, although it was fitting for Mood Kayo, there was a bit more of a softness to it since there was no trumpet in there (I believe I said Kawahara was the band trumpeter); instead, the flute and strings held reign, and the vocals by everyone reminded me more of the Hawaiian-tinged songs of the genre.

As for how the song did, it got as high as No. 3 on Oricon and finished the year as the 15th-ranked song. The group Akira Nakai-Sho Takahashi & Coloratino was discovered at a cabaret called Juu-Ni Ban Kan（十二番館...The No. 12 Building）in Nagasaki where they were playing as the house band. Of course, free enterprise being what it is, there were rival clubs for Juu-Ni Ban Kan, one of which was Ginbasha（銀馬車...Silver Carriage）. Guess the house band there? It was Uchiyamada & The Cool Five.

There have been cover versions of "Shianbashi Blues", one of which was done by veteran kayo chanteuse Sachiko Nishida（西田佐知子）. I'm not sure if her version had been recorded shortly after the original by Coloratino but it is a track on her 2007 "Nishida Sachiko Kayo Daizenshu"（西田佐知子歌謡大全集...Sachiko Nishida Great Collection of Kayo）. The arrangement is similar to the original, but I think I may end up liking Nishida's version even better because of that clear-as-a-bell voice of hers.

And speaking of the Cool Five, Kiyoshi Maekawa（前川清）and the guys performed their rivals' song as well in that distinctive Five fashion. 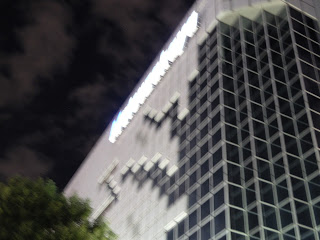