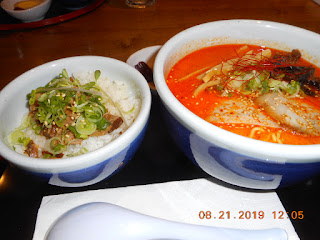 Y'know...as much as I haven't been to a ramen restaurant in over three months because of this pandemic, I've realized that I've yet to end up curled in a fetal position due to the matter. I mean, I'm still getting my ramen fix through packets of Sapporo Ichiban. Yes I know, ramen purists, it's not the same at all but I'm good with the instant stuff. Besides, real restaurant ramen has really only been with us here in Toronto for about a decade...and I got to eat the lion's share of the stuff because I had been living in Japan all those years.

Earlier this afternoon, I watched the NHK program "Japangle" which presents various aspects of culture in Japan in nifty ways, often with the help of CG. The theme was ramen whose episode was originally broadcast in January 2018 according to the J-Wiki article for the program. Although I saw it in the original Japanese, the above video has the Spanish dub with Professor Arrow and assistant Vector.


During the episode, there was this musical interlude displaying the history of instant ramen noodles. I was significantly impressed with the technopop involved here so I thought I would take the chance of seeing whether the song existed on YouTube. It turns out that the entire sequence and the episode as shown on top were right there.

It was dang nifty seeing the history of instant ramen and its packaging while "Epoch Men King" (Epoch Ramen King) was playing away while examples of decades of pop culture were also being revealed. The singer was Etsuko Yakushimaru（やくしまるえつこ）, the whispery-voiced chanteuse who performed the ending theme for beloved anime "Space Dandy" back in 2014. Chihiro Maruyama*（丸山千尋）provided the original lyrics while Leo Imai（ＬＥＯ 今井）from METAFIVE wrote the English lyrics and Yoshinori Sunahara（砂原良徳）composed the tune.

Until the all-clear is given to enjoy dine-in ramen once more, I will stick with Sapporo Ichiban and Demae Itcho.

*Not sure whether the first name for the original lyricist is properly pronounced since there seem to be several ways to read the kanji. If anyone can clarify for me, that would be great! 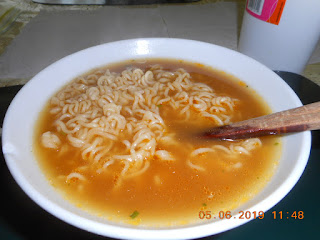