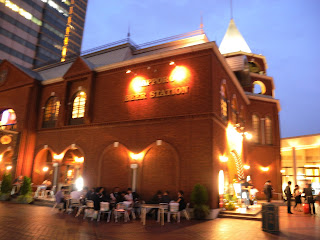 Tokyo's Ebisu district isn't nearly as sprawling as Ginza or Shinjuku but it's also got its fair share of restaurants and watering holes. When I think of the area, I usually think of Ebisu Garden Place, the entertainment/commercial complex across the street from JR Ebisu Station on the Yamanote Line, and one of the main buildings at EGP is Sapporo Beer Station. As I recall, I've been there a few times with friends for a medium mug of the suds and the usual snacks that surround it.


Enka/Mood Kayo singer Naoki Sanada（真田ナオキ）looks like he's been inhabiting a more stylish establishment there and he's been there for a lot longer considering that goofy grin in the thumbnail for the video above. That's because he's performing the short version of his latest single "Ebisu" which was released in January 2020.


I've found out from his J-Wiki profile that enka veteran Ikuzo Yoshi（吉幾三）has been writing and composing all of his singles (four, including "Ebisu"), so I'm wondering whether Sanada has been Yoshi's apprentice for the past few years. Sanada is showing a lot of guttural brio in his delivery as if he's been knocking back a lot of that reserved Old Parr at his favourite tavern. "Ebisu" is quite the heroic-sounding Mood Kayo and I can see it as a potential current favourite at the karaoke boxes for the business folks.
Posted by J-Canuck at 3:57 PM