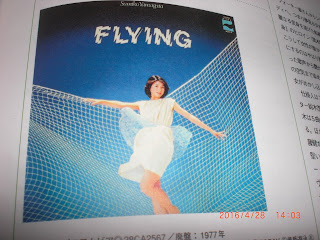 Long time, no see for singer-songwriter Sumiko Yamagata（やまがたすみこ）, so I've decided that this article will be a two-for-one, just to show that transition from folk to AOR within a few years.


I think it's a soprano saxophone which launches the calming "Ashita Anata ni" (You, Tomorrow), the B-side to Yamagata's 2nd single "Natsu ni Nattara"（夏になったら）released in June 1973. Written by the singer and composed by fellow folk singer Ryoko Moriyama（森山良子）, "Ashita Anata ni" is not quite as brisk as the A-side but it still has plenty of wistfulness as Yamagata sings about wishing to meet the guy she likes but probably not being able to pull it off due to the usual shyness issues. Somehow, I can picture Yamagata singing this while sitting by her window in her room. "Ashita Anata ni" is also a track on Yamagata's 2nd album "Ano Hi no Koto wa"（あの日のことは...The Event That Day） from September of that same year.

A few years later in 1976 through her 6th album, "Summer Shade"（サマー・シェイド）, Yamagata came up with an AOR-friendly number called "Ame no Nichiyoubi" (Rainy Sunday), and it has that melodic trope of the keyboard Haze effect which adorned many a 1970s City Pop/AOR number along with a nice jazzy guitar solo. The singer came up with the lyrics about enjoying that precipitation on her day off while heading over to her beau's house and pouring him a cappuccino (Wow! Did they have those back then too?). Toshiyuki Watanabe（渡辺俊幸）provided the music here.

Especially listening to "Ame no Nichiyoubi", I rather thought that 80s aidoru Naoko Kawai（河合奈保子）sounds just like Yamagata in her own mellower works. Indeed, I recall Kawai has also contributed to the AOR genre.
Posted by J-Canuck at 4:06 PM