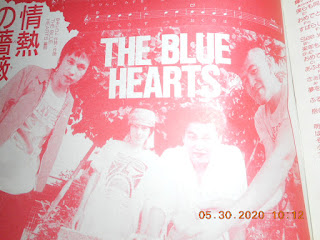 On NHK, there are the weekend broadcasts of sports in which one of them last weekend featured one athlete. The usual schtick presented here is that during the interview, he/she is asked about one song that has been somewhat inspirational in his/her life, and this one man (I forgot who it was and what sport he was playing) replied that he had come across this tune that knocked him for a loop the first time he had heard it.


That song was "Hito ni Yasashiku" (Be Kind to People), the latter of the first two independent label singles that rock band The Blue Hearts had put out before they got hitched to a major label that would later be known as Tokuma Japan Communications. Released in February 1987, the athlete appreciated vocalist Hiroto Komoto's（甲本ヒロト）lyrics of encouragement and staying in the game despite what might be thrown at him.


Komoto was also responsible for the rollicking melody. I'm not a punk rock fan by any means and The Blue Hearts have been categorized as such, but I think "Hito ni Yasashiku" is the most accessible and reassuring (punk) rock number that I've ever heard. Apparently a lot of other folks agreed as well because the song reached No. 26 on Oricon. Of course, right after this single, The Blue Hearts came up with one of their most famous tunes, "Linda, Linda", a song that got some of my fellow staffers at the Tsukiyono Board of Education during my JET days kicking up a punk storm in the karaoke bar. Glad the kids were already at home hard at their studies at that time.
Posted by J-Canuck at 2:17 PM