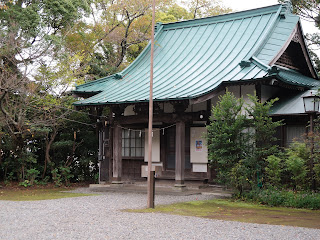 Even before the Japanese started getting that reputation of traveling in group tours while armed with cameras back in the 1970s and 1980s, they did and still love to travel even within the country, it seems, at least according to the enka genre. There is a large legacy of regional enka paying tribute to a certain city, prefecture, river or other geographical feature but ballads of traveling for the pure heck of it have also abounded, often with history in mind involving nomads during the feudal era of Japan.

One hit song with that them in mind was released in 1935 titled "Tabigasa Dochu" (Traveling Hat Journey) as originally sung by Taro Shoji（東海林太郎）. I read Noelle's write up of his "Meigetsu Akagiyama"（名月赤城山）and the description of the late singer which was confirmed when I actually saw ancient footage of him on a TV show singing "Tabigasa Dochu" on tonight's "Uta Kon"（うたコン）. With those round glasses and tailcoat that Noelle described, along with that very earnest delivery, Shoji reminded me of a dusty university professor who had literally spent years in a classroom but was going to make the most of his 15 minutes on the stage.


Regrettably, I couldn't find any footage of Shoji singing "Tabigasa Dochu" but here are a couple of far more contemporary enka singers to fill in. One is Mika Shinno（神野美伽）who hails from Osaka and debuted back in 1984. I've seen her often on "Uta Kon" and its predecessor program "Kayo Concert"（歌謡コンサート）so I was surprised that she hadn't been covered by either Noelle or me. She has also appeared on the Kohaku Utagassen twice in her career, in 1987 and 2003.

Going back to the song itself, "Tabigasa Dochu" was written by Masato Fujita（藤田まさと）and composed by Nosho Ohmura（大村能章）, and it's a jaunty song of vagabonds who go where the wind takes them while they live on the fringes of society. They don't mind the journey but they also hope someday to settle down. However, Ohmura's melody as arranged for Shinno's performance above seems to carve out a certain pride in this trek of itinerants which alternates between a romantic sweep during the sung portions while the intro, bridge and outro contain a certain manly staccato which may represent the proud don't-hold-me-back steps of the travelers.


(I'm sorry but the video got taken down.)

The other singer is the Prince of Enka himself, Kiyoshi Hikawa（氷川きよし）. I found the arrangement for his take on "Tabigasa Dochu" as being a lot softer and more wistful although Hikawa puts in a good amount of brio for his performance.


Well, whaddaya know? I did find a video with Shoji's original take via this old 78 rpm. In contrast to those earnest performances by him on stage, his recorded version of "Tabigasa Dochu" sounds quite serene. Plus, I can make out an interesting plucky guitar in the background there...or is it a Japanese instrument?


Finally, you can take a look at this empty karaoke version of the song since the movie here can give some illustration to the lyrics.
Posted by J-Canuck at 9:23 PM