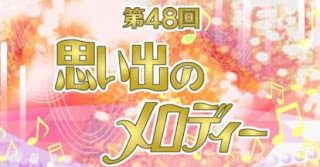 Although it's been almost two weeks since the 48th Omoide no Melody (aired on 27th August), I'd still like to talk about it, especially since I enjoyed it far more than the 47th edition. Yeah... I was being (very) lazy, hence the delay.

Let's get started, shall we? That right there's the slogan for this year. Tears, laughs, and most importantly, hits from way back in the day, what's not to look forward to? And I have to say that when I watched it, this round of the annual summer kayo affair fulfilled them all.

Hosting this round were renowned comedian Kinichi Hagimoto (萩本欽一), whom I had seen last year as a guest, and actress Mitsuki Takahata (高畑充希), whom I recognize as the main character from the latest NHK drama, "Toto Ne-chan" (とと姉ちゃん). Despite me thinking the pairing would be like any ol' boring duo, they actually brought some life into the emceeing bits, which I found myself snickering at from time to time. Hagimoto seemed to not have any holds barred that night and Takahata was happily tagging along.

Alright, with that down, on to the some of the songs I enjoyed or that were impressionable. Being split into two segments with five minutes of news to break the monotony, the first one and a half hour or so seemed to feature more of the enka-themed stuff, but there was also plenty of kayokyoku and a rather silly tune sung. I'll be focusing on this here as I think including the second segment would make the article too lengthy.


Nope, lookin' up didn't help when this song was sung, Kyu-chan.

Getting the "Omoide no Melody" ball rolling was the international classic and a staple of this show, "Ue wo Muite Arukou" (上を向いて歩こう) a.k.a. "Sukiyaki", which was sung by the entire lineup for the night. Man, the ninja-cutting-onion game was strong right then and there - a rough few days and the thought of the song's legendary lyricist's passing was one too much to handle for me. I'd say it was a nice tribute to Rokusuke Ei (永六輔), but the actual tribute would happen a while later in the second segment.


One such enka song was Hachiro Kasuga's (春日八郎) "Otomi-san" (お富さん), performed by Hiroshi Miyama (三山ひろし). Good choice of singer and I actually nodded with approval when he was up there. A bonus was when a short clip of Hachi singing his most famous single was shown - aMAzing. Y'know, I feel like my transformation into an enka fundamentalist oldie is almost complete. The only thing I'm lacking in now is my age.

Bringing Mood Kayo to the NHK stage were one of the Mood Kayo All Stars, Los Indios (ロス・インディオス), and "Uta Kon" regular, Midori Oka (丘みどり). The song was none other than "Wakarete mo Suki na Hito" (別れても好きな人). It was nice to hear it once again, and similar to Miyama's performance, a clip of Silva (シルヴィア) with the gang at the Kohaku was shown as Oka sang her part.

Look at them go!

Here was a familiar name I was glad to see, mostly because she, together with her cronies, were responsible for the first Japanese song from the 60's I'd ever heard, "Koi no Kisetsu" (恋の季節) - yep, I have a history with this. Yoko Kon (今陽子), or Pinky, was real spunky in her performance and she was decked out in a hip-hop inspired outfit. Dang, she was cool! My only complaint was that The Killers weren't behind her; a quartet of slick-dancing dudes took their place. Would've been cute if they were there though, like in the video here.

Now, about that one silly tune I mentioned earlier, it's "High School Lullaby", by the Imo Kin Trio (イモ欽トリオ). It was sung later in the first segment, if my memory serves, when it was time to look back on Hagimoto's heyday in "Kin Don!". In this instance, the focus was on what was probably one of the more iconic series that featured an exasperated Dad and his three boys. Well, Yoi-ko and Warui-ko have all grown up now, and the Dad was Kazuki Kosaki (小堺一機) impersonating Hagimoto - Kin-chan himself butted in indignantly a few times - but something was different about Futsuu no ko. Slimmer, taller, (a lot) younger... Keisuke Yamauchi (山内惠介). Yup, this enka pretty boy stood in for the original Futsuu no ko, played by Kenji Nakae (長江健次), to form Imo Kin Trio '16. It seemed a little strange a first, and even "Hagimoto" acknowledged the age gap, but Yamauchi put up a pretty good show.

Continuing on the "Kin Don!" portion, there was Takashi Hosokawa (細川たかし) plus "Kita Sakaba" (北酒場) - Mom would've loved this (she had something to attend to that night). Another jaunty number to wake up the audience, plus the telling of the "Kin Don!-Kita Sakaba" incident. This was basically how it went down: Hosokawa was a regular guest in the "Kin Don!" series since the late 70's, and at that time of his golden hit's release, he intended to sing it on the show as promotion. But he wasn't very familiar with the lyrics and was relying on reading off a crawler or something like that. The problem was, when it was time, a bright spot light shone down on him and he was unable to see the words. So there young Hosokawa was, holding a pinwheel and running to and fro, desperately trying to dodge the spotlight. You can have a look a that mishap in the video below at about the 19:40 mark.

This show right here was actually being played on repeat on a tiny TV in the Makkari-mura Flower Center, by the way. This and only this. I didn't mind though.

That's it for Part 1 of the 48th Omoide no Melody review. Stay tuned for part 2.