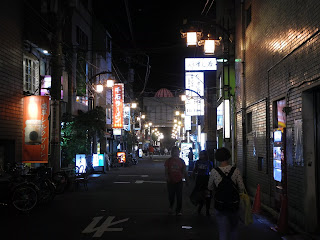 You may have seen me use my photo of a quiet Asakusa street from time to time whenever I have written on a Mood Kayo or an enka tune. Well, I'm gonna use it again for a similar kayo done in the jazz vein. The only thing missing from the shot is a good amount of fog.

OK, fair warning to you...when I was playing the video on Dailymotion, I got hit with some sort of request for a Chrome survey and a message stating that I was the umpteenth customer. I don't know if that was just for me since I am using Chrome or if it was some sort of scam trap. I simply got out of the site and tried again with success this time.

Now that I've given my PSA for the day...it's been a while since I came across a Mieko Nishijima（西島三重子）tune. For KKP readers who haven't followed the Nishijima file too closely, she has been this wonderfully mellow Folk/New Music singer-songwriter who has been around since the 1970s. I first discovered her since her songs got fairly frequent notice on "Sounds of Japan", my old radio program on CHIN-FM.

Again, the J-Canuck force has been with me today since I managed to find this 1984 entry by her via a Twitter feed for an online radio station featuring Japanese music of the 1980s and 1990s not even an hour ago. "Yuyami no Futari" (A Couple at Dusk), which was written by Nishijima and composed by crooner extraordinaire Takao Kisugi（来生たかお）, is a torch song perfect for performance within some hole-in-a-wall smoke-filled bar in one of those Asakusa alleys or even some place more upscale in Akasaka. I couldn't picture Nishijima ever lying down on a grand piano singing this since my impression is that she would be too mortified to do it but this is the sort of scene I would envision about this ballad. Both her and Kisugi weave this picture of a couple strolling arm-in-arm in a thick fog over a stone bridge with some romantic gas lights providing guidance.

According to the description of this YouTube video, this is a cover version of the song at a jazz bar in Akita City late in 2014. As for the original song, I was able to find out that it was from 1984 but it doesn't seem to be included in any of her albums so I am wondering if "Yuyami no Futari" was a B-side on one of her singles. Regardless, if you need to unwind a bit after a harrowing Monday at work, perhaps this song can provide some solace...with a nice stiff drink.
Posted by J-Canuck at 7:29 PM