Ah, this song (and MV) never fails to lift my spirits.

From what I've been seeing, Yuzo Kayama (加山雄三) collaborates with many bands to come up with a number of his works since ever. There's The Launchers (ザ・ランチャーズ) and The Wild Ones (ザ・ワイルド・ワンズ) that go way back during the Group Sounds era and to when the Wakadaisho was actually wakai and awkward. Fast-forwarding to just last year in 2015, he was in the unit, THE King ALL STARS that looked like some hip rock group. But my favourite Kayama-collaboration has got to be with The Yanchars (ザ・ヤンチャーズ) back in 2010, during Kayama's 50th anniversary of being in showbiz.

Here are the members of The Yanchars: Kosetsu Minami (南こうせつ), Masashi Sada (さだまさし), Ryoko Moriyama (森山良子), Shinji Tanimura (谷村新司), and THE ALFEE. It's like a gathering of Kayama's pals! As for why I love this gathering of folk veterans - it's the music video. It had them looking cool with shades and strumming guitars, and adorable (especially Minami in that chullo) at the same time. Before seeing this clip, I never paid much attention to these guys as I don't listen to folk all that much, but they've definitely made their presence known to me by showing off their fun side.


Kayama and The Yanchars had released only one single, "Za . Lonelyhearts Oyaji Band", on 7th April 2010. It peaked at 36th place on the Oricon charts, which I think is quite decent for a group of aged singers. Witnessing the chemistry between the members and judging by how much I like this song, I really wished that they would have come up with more than just one piece. Oh well, I take what I can get.

Putting "Za. Lonelyhearts Oyaji Band" together were Sada, who was in charge of the lyrics, and Kayama as Kosaku Dan (弾厚作), who composed the music. What interested me in this tune was its amusing name that literally has "old man band" in it. Then what got me hooked was the bright and cheerful melody that is mostly folk-oriented, but then there's the screaming electric guitar that comes in from time to time that spices things up and gives it a rock vein. Hearing it with the voices of the folks behind the mic, the first thing I thought was, "ROOOAD TRIP!!!" - I can clearly envision a bunch of oldies going on a road trip in a beat up Volkswagen Kombi to relive the memories of bygone days. And speaking of memories, I'm guessing that's the main focus of "... Oyaji Band". Y'know, said oldies who were once in a garage band of sorts coming back together to play again for nostalgia's sake. Same old songs and it's as if nothing had changed over the years despite going through the pains of growing up. Come to think of it, perhaps the band's original name was "Za . Lonelyhearts Band" and the "Oyaji" bit was added years later. :) 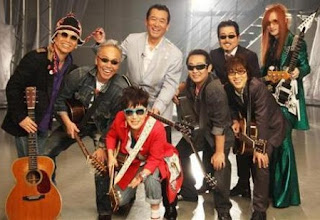 Hmm, I wonder what "Yanchar" in The Yanchars stands for. If I'm not mistaken, Sada came up with the name. The only possibility I could think of is "Yanchar" meaning "Mischievous/Naughty" in Japanese... Actually that would be quite funny if it were really the case.
Posted by Noelle Tham at 11:03 AM