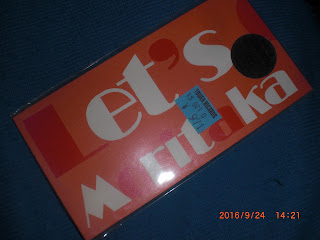 The impression that I've been getting from Chisato Moritaka（森高千里）after her chart-topping techno aidoru phase from the late 1980s going into the next decade is that she took on a slightly more down-to-earth Beatles-y sound. But I think she also wanted to achieve a summery stop-and-smell-the-roses tone in her songs as the 1990s passed by. "Watashi no Natsu"（私の夏）and "La-La-Sunshine" were two examples of the more laid back Chisato who seemed to want to now play on the sands of Shonan rather than among the towers of Tokyo.


Another later example was her 29th single "Let's GO!" from February 1997. During a time when the club pop sounds from Tetsuya Komuro（小室哲哉）and his folks were in the ascendant, it was nice to hear Moritaka, who had once brought her own form of boppy technopop years earlier, bring something more relaxing. I first heard "Let's GO!" on a series of  Lawson's convenience store commercials which starred her and YMO's Haruomi Hosono（細野晴臣）along with actor Masanobu Takashima（高嶋政伸）, and there was just something that clicked between that soft and wistful song and the appeal of hitting the conbini for that wonderful karaage bento. Considering that the weeks leading up to the release of the song were in the winter months, it added that further incentive to me at least to head out for some warm (or warmed over) goodies from Lawson.


I was fortunate to live in a neighbourhood which was chock-full of convenience stores, and the local Lawson was the closest one to my apartment in Ichikawa. It was virtually a minute away just around the corner. The above video apparently has a few aidoru, perhaps members from Morning Musume（モーニング娘。）since Sayumi Michishige（道重さゆみ）, the former leader of not only the Musume but of Hello Project in general, is in there. I just found out that she was the member with the longest-serving tenure in the group at 11 years and 10 months. Geez, she's 27 years old as of this writing...they grow so fast! Anyways, they are apparently going through on-the-job training. Well, it's kinda nice that Musume alumni have something to fall upon.


Getting back to the song, Chisato took care of the lyrics while Hiromasa Ijichi（伊秩弘将）, who had helped out on a number of songs for Misato Watanabe（渡辺美里）and SPEED, composed "Let's GO!". It peaked at No. 19 and was included on her 12th album "Peachberry" from July 1997. In a Pavlovian sense, every time I hear the tune, I get this saliva-filled craving for bento with either karaage or hambaagu.