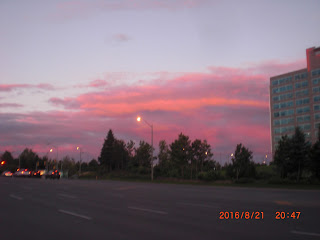 The weather folks out there were predicting higher-than-average temperatures for September in my area, but it sure seems a lot more reasonable and seasonable today. It was actually pleasantly cool, bordering on chilly, this morning as I took my walk. If it keeps up like this, then I know that summer is definitely making its way out.

Back on Tuesday, I caught NHK's "Uta Kon" (うたコン) for the first time in its entirety since the Olympics wrapped up. Happy to say, there were a lot of the old kayo songs out on display but I did also hear a nice little something by Naotaro Moriyama（森山直太朗）.

Moriyama, who is the son of veteran folk singer Ryoko Moriyama（森山良子）, has been around in show business since 2001, mostly as a singer but I've seen him pop up in the occasional appearance on variety shows and even dramas. He's got a goofy deadpan sense of humour which I've liked and perhaps has also endeared him to his fans.

However, it is his music which has gotten him his fame, along with that amazing falsetto. I have yet to write about his big breakthrough hit, "Sakura"（さくら）, but on Tuesday, I did hear him sing his follow-up 3rd single, "Natsu no Owari"(The End of Summer) and was duly impressed. Originally released in August 2003, Moriyama created the ballad with the help of Kaito Okachimachi（御徒町凧）on lyrics, and I think he hit the mark in bringing about that feeling of the cooling summer paired with that love song.


The single managed to hit as high as No. 6 on Oricon and is also a track on his 3rd mini-album, "Ikutsumono Kawa wo Koete Umareta Kotoba-tachi"（いくつもの川を越えて生まれた言葉たち...Words Born Beyond The Rivers）which was released a couple of months before "Natsu no Owari". It peaked at No. 3 on the charts and ended up as the 38th-ranked album of the year.
Posted by J-Canuck at 2:48 PM