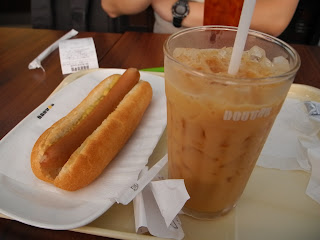 The above is from a local Doutor coffee shop in Tokyo. Yep, a hot dog and an iced milk tea is my thing. No, I didn't need to visit a washroom and then have an Imodium afterwards. It all went down smoothly. Still, even as of 2014, I think Japan needed to work on their frankfurters when it came to hot dogs...just not quite the hot dogs I love here back in Canada. When I came back here to visit over the Holidays, I just had to have my hot dogs for lunch at least twice.

I don't know quite what it is. Nathan's Famous did give it a go in Tokyo for a few years but ultimately failed. I can say that I was one of their more loyal customers since I did love their dogs as something reminiscent of home. But I guess it's just one of those things. The Japanese didn't really go for our franks and I don't particularly go for theirs. The Doutor hot dog was OK but Nathan's or Maple Leaf or Schneiders has nothing to worry about.


Still, going out with a buddy or a few friends and getting some tea and stuff at a local watering hole was one of my favourite pastimes when I was in The Big Sushi. It's easy to get into since there are so many coffee shops and tea rooms in the megalopolis.

Apparently, the sister act of Charan-Po-Rantan（チャラン・ポ・ランタン）thinks similarly since they've come up with their own tribute to a girls' day out on the town with "Ocha Shiyo" (Let's Get Some Tea). The song is so new that the album that it has been recorded on, "Mirage Collage"（ミラージュ・コラージュ）, isn't due out until November 1st (two weeks from now).

Up to now, it's been difficult for me to categorize the Matsunaga sisters' sound. Officially, J-Wiki has them pegged as an alternative/chanson/ska duo. I have yet to hear anything on my own from them that would be heard as chanson but I can pick up on the ska. And yet I can also sense some gypsy jazz and perhaps even some old-fashioned chindonya. However, one commenter on YouTube under one of their other videos was perhaps right on the mark when he remarked that it was the first time he had ever heard of Asian polka.

Certainly, there is that genki polka feeling in "Ocha Shiyo" along with Momo (vocal) and Koharu (accordion) bantering frenetically at warp speed (or should I now say spore speed considering "Star Trek Discovery"?) while doing their Harajuku tea thing. Of course, I've been out of practice with my comprehension of youth talk in Shibuya (not that I was all that fluent in the first place) but I think the Matsunagas are using a goodly amount of the current teen patter (although both are now in their twenties). I wouldn't dare butt into such a conversation.

Anyways, I'm looking forward to seeing some old friends and doing our old kaffeeklatsch when I hit Tokyo again someday.
Posted by J-Canuck at 8:19 PM