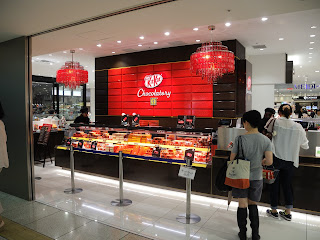 The above picture is of a place called a so-called chocolatery belonging to the world-famous Kit-Kat located underneath Tokyo Station. My friend and I visited the place since we could get all sorts of tasty souvenirs there, and next time I go, I will most definitely be invading the place again. Japan may not have achieved the status yet but it's sure going for the record of being the nation with the most varied types of Kit-Kat chocolate bars on the planet. I have tasted their sake-flavoured version (just a hint of that famous taste, mind you) along with sakura and orange-peach, I believe. It will be interesting to see what I can find this time.


The reason I mentioned the above is that Kit-Kat gets a shout-out within the lyrics of "Ikkyu-san", which is a track on the first major album from February 2017 by the quirky and slinky Suiyoubi no Campanella（水曜日のカンパネラ）, "Superman". Heck, there's even a sly tap at the famous catchphrase for the product.

Watching the above music video with vocalist KOM_I being ever watchable, I couldn't help but feel it and the video for Mondo Grosso's "Labyrinth" were somehow cousins, although I now have the impression that "Ikkyu-san" may have been filmed on an elaborate sound stage emulating Hong Kong instead of being the real thing. In any case, while it looked like Hikari Mitsushima（満島ひかり）was tripping the light fantastic in a quieter zone of the metropolis, KOM_I was raving it up a few blocks down at some sort of cosplay dance party.


As for the title, at first I wasn't quite sure about it. I thought it was translated as "Mr. Breather" but then I found out that there was an old anime from the 1970s with the exact title "Ikkyu-san" about the historical Zen Buddhist monk and his adventures as a cute problem-solving kid. Although I couldn't find any written evidence for it, I think Suiyoubi no Campanella may have been referring to him according to the lyrics which describe the titular figure as a good and witty fellow. We can all use an Ikkyu-san in our lives.


In any case, I enjoyed KOM_I's high-and-breathy vocals in the refrain along with her customary rap plus the mix of funk and light technopop. You know, it wouldn't be too bad if she and the rest of Campanella ended up as part of the entertainment for the 2020 Games.

Email ThisBlogThis!Share to TwitterShare to FacebookShare to Pinterest
Labels: 2017, J-R and B, Pop, Single, Suiyoubi no Campanella, Techno