I have my - as from what I've picked up from the kayo shows I've viewed - "Yume Kyouen" (夢共演... Dream Collaboration) fantasies where I imagine some of my favourite artistes working/performing together, as any fan would. Some came true, some, unfortunately, won't ever because of how odd they are and/or because the musicians have already left mortal coil. Despite the multitude of Yume Kyouen I've come up with, I don't think a collaboration between the pillar of a man that is Mae-Kiyo and the electric guitar-wielding Forever Wakadaisho has ever crossed my mind. But here we have "Uso yo". Roughly translated, it means something like "That's a lie" or "You're lying", and I got to say that it's quite similar to my thoughts when I first saw the news of that on Twitter. Also, it knocked my figurative socks off so far out they'd probably be on the other side of the Pacific Ocean... y'know, after flying westwards in the direction of the European continent.

Alright, seriously speaking, from what I knew of Yuzo Kayama's (加山雄三) works, unlike fellows like Yujiro Ishihara (石原裕次郎) and Akira Kobayashi (小林旭), he didn't venture far into the Mood Kayo or enka territories. I do recall this one occasion where he sang "Naniwabushi dayo Jinsei wa" (浪花節だよ人生は) and sounded like an enka singer through and through, but other than that he seemingly stuck to pop, rock, folk and Group Sounds. But recently, it has become evident that the Wakadaisho has always loved MK and enka, and is a big fan of, as you may or may not have guessed (I certainly didn't!), Hiroshi Uchiyamada & Cool Five (内山田洋とクール・ファイブ)/Kiyoshi Maekawa (前川清), so much so that he'd often pick their songs at the karaoke. He even created a piece of music for them in the early 80's! However, for whatever reason Kayama had, the song did not come to pass. Fast forward to over 30 years later, in the light of Mae-Kiyo's 50th anniversary of being in showbiz early next year, Kayama finally revealed this long-kept melody and gifted it to one of his favourite singers to make "Uso yo".

As Maekawa himself said the moment he heard the music, it sounded very him. At first, I wasn't exactly sure what to make of that until the short MV clip came out and I was greeted by the sharp strings and roar of the electric guitar. What followed was a rather angsty MK-enka hybrid that is reminiscent of what a typical Cool Five tune would've sounded like in, well, the 80's. Included in the package are bits of the song where Mae-Kiyo gets to showcase his forlorn and vibrato-filled dragging of the last syllable of a line - very him, alright. The lyrics were written by Seishiro Kuno (久野征四郎), and it was released about a month ago on 20th September 2017, doing fairly OK on the charts by peaking at 95th place.

To be honest, I didn't really take to "Uso yo" all that much and I'm still in the process of completely warming up to it, as I normally do when it comes to this sort of songs. I was also kind of hoping that it'd be more pop-sounding, but oh well... Can't have the cake and eat it too...? It's a collaboration I won't forget, that's for sure, especially since that consisted of the both of them performing side by side on "Uta Kon" and "BS Shin Nippon no Uta".

Here's the "Special Stage" segment where Mae-Kiyo and the Wakadaisho explored the latter's enka and MK appreciation. Kayama really nailed the Maekawa-ness of those Cool Five songs. That settles it, I'm going to get Kayama's "Enka Nagashi Uta" (演歌流し唄) album - yup, he's apparently got a whole album on covers of hits from the genre too! 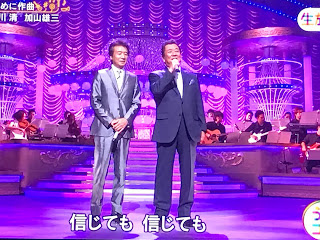 At the moment, the only other collaboration that'll garner the same amount of unbridled joy would probably be if Mae-Kiyo (or, actually, Kayama too) performed with Duke Aces (デューク・エイセス).
Posted by Noelle Tham at 12:10 PM