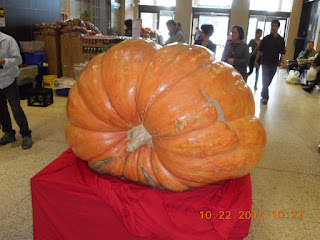 Halloween is once again upon us. I was checking a YouTube live stream camera overlooking the famous scramble crossing in front of Shibuya Station in Tokyo on Saturday morning (Saturday night in Japan). Considering the maelstrom of costume-wearing folks that has descended upon the area in recent years, I had been expecting a similar sight. However, due to the effects of Typhoon No. 22, the whole thing was literally a washout. Perhaps things might be different on Tuesday October 31st.

I may have mentioned this before in previous Halloween entries on "Kayo Kyoku Plus" but during the first several years of my stay in Chiba, the spooky holiday barely existed in Japanese pop culture. In fact, the only sign was a rogue bunch of English teachers who would hijack one car on the Yamanote Line in Tokyo for one round trip of costumed carousing. Of course, the local police did their best to deter the relative miscreants.

In those early years, some of my fellow English teachers at NOVA and I tried to spread the word about Halloween to students through special events which even involved some of us wearing costumes. I made my own get-up in the form of Tuxedo Kamen（タキシード仮面...Tuxedo Mask）, the mysterious figure and love interest of the famous Sailor Moon（美少女戦士セーラームーン）since I did watch the series on videotape when I was back in Toronto in the early 90s.

Basically it involved a dark suit, a bow tie and the mask (both made of construction paper). Unfortunately if not particularly surprisingly, I didn't really get much of a response from most of the students (middle-aged people tend not to watch "Sailor Moon") on the costume but hey, the pumpkin carving was fun! And no, I didn't try to get long-stemmed roses either. There are a few photos of me on that night but they are staying locked up tighter than those JFK files...but the US government finally opened those last week, didn't it?


Let us now segue then to one of the many ending themes for "Sailor Moon", in this case, "Tuxedo Mirage" which was sung at the end of each episode during the third season known as "Sailor Moon S" between 1994 and 1995.

This was performed by the main cast of the show, namely the five Sailors: Moon, Mercury, Mars, Jupiter and Venus as acted by Kotono Mitsuishi（三石琴乃）, Aya Hisakawa（久川綾）, Michie Tomizawa（富沢美智恵）, Emi Shinohara（篠原恵美）and Rika Fukami（深見梨加）respectively.


With lyrics by "Sailor Moon" creator Naoko Takeuchi（武内直子）and music by singer-songwriter Akiko Kosaka（小坂明子）, "Tuxedo Mirage" kinda struck me as sounding like a 1980s power pop ballad with ambitions of grandeur along the lines of those charity singles that were huge back then such as "We Are The World" and "Do They Know It's Christmas?". One would think that the song was trying to raise money for suffering formal wear stores.