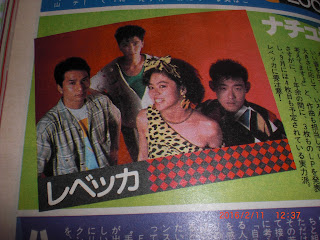 All the way back in December 2012, I was writing the article for "Friends"（フレンズ）, arguably the most famous hit for the 80s rock band REBECCA（レベッカ）, and I made the remark that I wasn't particularly impressed by my first view of them performing the song "MONOTONE BOY" when they appeared on one of the music shows. Perhaps it was "The Best 10" or "The Top 10", I'm not sure.


Well, I finally decided to give "MONOTONE BOY" another go after many years. Incidentally, this was REBECCA's 7th single from April 1987 with music by band keyboardist Akio Dobashi（土橋安騎夫）and words by Takashi Matsumoto（松本隆）.

I can say that the wonderful filters of time and nostalgia have helped. Although I cannot say that I have found a love for "MONOTONE BOY", it's no longer the grating first impression I got from NOKKO and company. Furthermore, I think part of my initial dislike for the song was due to the fact that I hadn't quite meshed Japanese pop music with rock music since at the time it was all about the aidoru and the enka. So I think the whole REBECCA thing had caught me off-guard


Therefore pseudo-feud ended. And it was obvious that I had been very much in the minority since it went all the way up to No. 3 on Oricon and ended up as the 50th-ranked single for 1987. The song was also the theme for the 1987 coming-of-age flick "Binetsu Shonen"（微熱少年...Feverish Boys）based on the novel written by lyricist Matsumoto himself. He even directed the movie! The movie's cast also had its supporting characters played by some famous musicians such as Ryoko Moriyama（森山良子）, Haruomi Hosono（細野晴臣）and Takuro Yoshida（吉田拓郎）. "MONOTONE BOY" ended up on the official soundtrack.


As a little bonus, you can see a bunch of ads featuring REBECCA.
Posted by J-Canuck at 9:40 PM