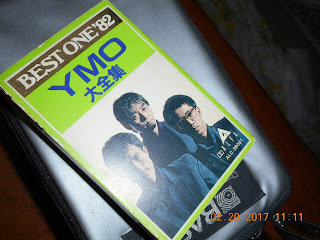 Years ago, I bought a VHS tape of a documentary and music videos of Yellow Magic Orchestra, and of course, the usual suspects were in there such as "Firecracker", "Rydeen" and "Kimi ni Mune Kyun"（君に、胸キュン。）. But in between interviews and videos, there were brief interludes with some graphic showing pieces of the YMO timeline since they started up in 1978 along with snippets of their music.


The last or second-last interlude on the tape then featured a tune that I had never heard before. And each line, it started off with "Everyday...". I was rather entranced by the melody and the dreamy vocal that I had assumed was main vocalist Yukihiro Takahashi（高橋幸宏）.

It wouldn't be for another number of years before I found out that the song here was "Perspective" from YMO's 8th album from December 1983, "Service". Starting off with a definitely un-techno piano accompanied by a synthesizer, "Perspective" goes into a curious and beautiful riff that would make for a lovely song to go with the daily beat of the average worker. The technopop is in there but I think the song is one of their most down-to-earth efforts, so to speak.

Ryuichi Sakamoto（坂本龍一）wrote and composed "Perspective" with YMO associate Peter Barakan also working on the lyrics. And I believe that is indeed the Professor intoning the actions of the day while the song is moving on. While these actions such as brushing one's teeth and reading the paper might be the usual humdrum activities, putting them to music as YMO have here gives "Perspective" that wistfully comforting sensation...that in a way, it's a blessing to have that humdrum. In fact, Sakamoto mentioned in a Boxing Day interview on a Tokyo FM radio program via the J-Wiki article for "Service" that the song was one of the band's favourites.


I found this concert video with Arto Lindsay and Sakamoto performing "Perspective". "Service" peaked at No. 5 on Oricon.
Posted by J-Canuck at 8:49 PM