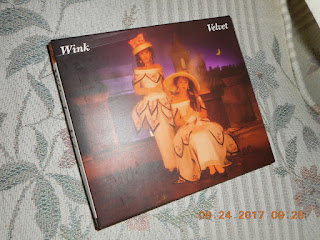 I had breakfast with the parents at a nearby Eggsmart this morning, a local diner chain which has a pretty sumptuous Classic of eggs, sausages, potatoes and toast with bottomless cups of coffee (of course). My doctor doesn't like me having the stuff but I like it. And didn't I say last week that my bad cholesterol went out a tad? I'll take any points I can get.

My intro here is to talk about the old Kool & The Gang song, "Joanna" from 1983. It was about as warm and sweet as the maple syrup that my Dad used to pour on his buttermilk pancakes, and the official music video took place in an old-fashioned diner where the titular Joanna, beloved owner, was serving the band and her favourite customers. "Joanna" also got lots of love from listeners (hit No. 1 with a bullet on the US Billboard R&B charts) and it was so very nice to hear that mellow trombone near the end again. I remember the video being shown over and over again on the local channels.


Well, hello Wink! It's been a while. I was surprised many years later when I bought my copy of their "Twin Memories" album and found out that the duo did a cover of "Joanna". Although Kool & The Gang will always corner the market with their hit, I think Wink...specifically Sachiko Suzuki（鈴木早智子）who handled the main vocal part...did a pretty nice job with the song. And I gotta give some respect to Neko Oikawa（及川眠子）who provided the Japanese lyrics. Suzuki sounded quite smooth singing them.

"Twin Memories" came out in December 1989. If I'm not mistaken, it was the first Wink album that I ever purchased while I was in my little town of Tsukiyono. It peaked at No. 2 on Oricon.
Posted by J-Canuck at 10:31 PM