The First Enka Singer's debut single has a rather distinctive opening, don't you think? It sounds like a railway train coming alive, moving slowly as the engine heats up before picking up the pace as it leaves the station. And throughout the whole song, the music sounds like the train is just chugging along through the countryside or the city.

Anyway, 'Akai Lamp no Shuressha' or 'Last Train with the red lamp', written by Yoshiro Okura (大倉芳郎) and composed by Yoshi Eguchi (江口夜詩) was released in 1952. I don't think it did as well in terms of sales when compared to his more jaunty 8th single 'Otomi-San' from 1954. Can't say for sure since there was no write up on the song, but it definitely allowed him to gain some recognition. And he only sang it once at the 26th Kohaku in 1975 (Aw man, if I was there at that time, my vote would go to the white team!).

But whenever I see Kasuga taking turns to sing when performing with other singers like his best pal and fellow Enka singer, Michiya Mihashi (三橋美智也) or the gentle Chiyoko Shimakura (島倉千代子), the song of choice seemed to be 'Akai Lamp no Shuressha'.

Moving on, in 2007 a plaque to remember the song was added at/near the train station of Kasuga's hometown of Aizubange, Fukushima, 3 years after a bronze statue of the singer himself was put up. Hmm, I must visit that place some time and take a photo with the statue... and maybe visit his memorial museum too.


Here's Kasuga singing the song in 1984 in his usual double-breasted suit with bow tie. 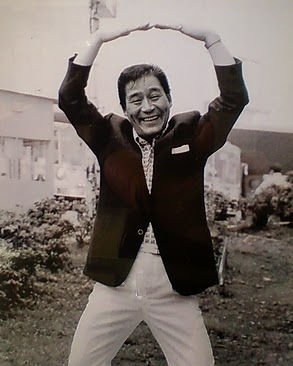