Y'know although I'm not that much of a Haruo Minami (三波春夫) fan, I always enjoy seeing the Enka and Rokyoku (浪曲) singer on stage. I mean, he just emanated such positive energy! Generally dressed in light colored kimonos, one hand on his hip and last but not least with that trademark radiant smile of his he would be able to brighten up the stage once he came on.

Anyway, 'Otone Mujou' was Minami's 8th single released in 1959, and not only is it an Enka song, but also a Rokyoku song, so there would be some narration in between the singing parts - Rokyoku's a type of traditional Japanese narrative singing. It was written by Ryo Inomata (猪又 良) and composed by Yoshiji Nagatsu (長津義司).

In this song, you would be able to see Minami turn from jovial to no-nonsense at the drop of a hat. Especially so at the last monologue where his narration grew from somewhat gentle, but still filled with savageness to kinda screaming it out with such intensity at the end like some crazy bloke. And you could also see that glint of ferocity mixed with a little insanity in his eyes too. So unlike the usual Minami!

But it was that versatility that intrigued me and got me to continue listening to 'Otone Mujou' even though it's not the type of Enka song - let alone Rokyoku song - I'd usually listen to. In fact, I only discovered this song while listening to Hideo Murata's (村田英雄) 'Osho' (王将). It was in the 'Suggested videos' list, so I thought, "Why not? Since I've not really heard any of Minami's songs." Fine, his graceful movements while narrating was also what caught my attention... well it is pretty cool!

In total, Minami sang 'Otone Mujou' 3 times on the Kohaku. And he had appeared on that event 29 times, putting him at 9th place in 'Most number of Kohaku appearances', which is quite impressive really. 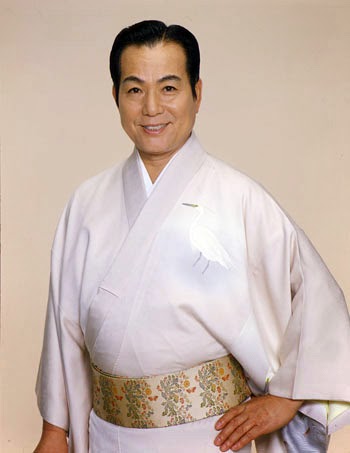