Ain't nothin' more manly than going out to the choppy sea for some fishing in ye ol'weather-beaten vessel! Or that's the impression I got from listening to Saburo Kitajima's (北島三郎) 'Kita no Ryoba', or 'Northern fishing grounds'.

I'm generally not too fond of songs by Sabu-chan because of his singing style, but the moment I heard the music - done by the late composer, Seiichi Sakurada (桜田誠一) and lyrics by Kaoru Shinjo (新條 カオル)  - I kinda knew sooner or later I'd grow to like the gritty Sabu-chan tune, much to Mom's disdain for she has a, and I quote, 'profound dislike' for the singer. She could tolerate (barely) the intimidating Hideo Murata and Grande dame Hibari Misora. But Grandpa Enka would be a definite NO. Heh, I remember that look of venom she shot me when I told her I liked one of his songs a few days back. I could bet my bottom dollar she'd hit the back of my head with a fan at the drop of a hat if we were Japanese.

As I was saying, the song really makes you envision being out on those fishing boats (I'd call it the S.S. Sabu even if it were a little rubber dinghy) on rough seas, overcast skies and mile-high winds, seagulls up above squalling in excitement, hoping to steal some of the day's catch just hauled in by some salty sailor/fisherman. So like I implied above, it has an aura of manliness to it.

Moving on, the song did quite well and at its peak, placed 17th on the Oricon charts. It also helped Sabu-chan bag another award at the 28th Japan Record Awards, this time for 'Best singer'. However, he only sang this song once out of his 50 appearances at the Kohaku and only after 22 years later after its release in 1986. A song like this makes me think that it'd have more rotation at the annual competition, no?

I had actually first heard this song while watching Monomane talent, Korokke (コロッケ) spoofing the half an hour long Enka song show, 'Enka no Hanamichi', but never paid much attention to it since I was too preoccupied with laughing as Sabu-korokke ordered the Sabumaru to go port and starboard.

The link above is for that 'Enka no Hanamichi' spoof, and the 'Kita no Ryoba' part is the last act, but you can enjoy Korokke's staple repertoire of Aki Yashiro, Hiroshi Itsuki and Shinichi Mori first. Everything seems normal until 'Aki Yashiro' turns around... 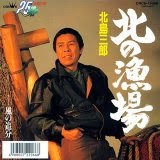