Ah Hiroshi Itsuki (五木 ひろし)... I've heard lots about and seen much of him when I first entered the world of Enka and Mood Kayo about a year back. I always viewed him as the fellow in the same league as Grandpa Enka, Saburo Kitajima (北島 三郎) and the Prince of Enka, Kiyoshi Hikawa (氷川 きよし), judging by his popularity. And I'm quite sure I'm right on this one.

I also have to say that one of my first Enka favorites was none other than his breakthrough hit from 1971 'Yokohama Tasogare' (よこはま・たそがれ). But after that song, I had no other of Itsuki's songs that I fancied for quite a while as I discovered other Enka songs and more songs J-pop songs from the 90's. And especially since I discovered Kiyoshi Maekawa (前川 清) - my personal favorite.

Moving on, it was only until a couple of months ago did I finally find more of Itsuki's songs to listen to. And one of them was 'Izunokuni', that was released on the 7th of August, 2013 as a B-side to 'Hakata à la mode' (博多ア・ラ・モード), which I have also come to like. 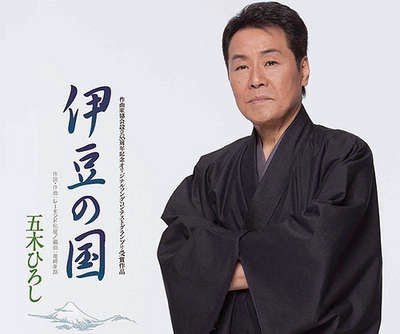 With the lyrics written by songwriter Toyohisa Araki (荒木 とよひさ) and music by Takashi Nango (南郷孝), this is what I call a true-blue Enka song. Quite a slow-paced one throughout as well, and rather gentle. Slightly intense at the chorus.

Although I'm not entirely sure what the song actually means, I think it should be about Izunokuni, a city in east of the Shizuoka prefecture (Only discovered this while writing this, really). There was some mention about the smell of the onsen at the beginning of the song, which could be due to the fact that Izunokuni has many of those hot springs littered around the hilly region. Well, that's about all I could figure out. The rest of the lyrics were quite obscure to me (My Japanese is quite limited).

Here's a video of Itsuki singing the song. Since it is a really 'Enka' Enka song, he obviously has to be in his kimono - a smoky dark blue one for this - and... well... flip-flops... I don't really know if they have a particular name for it.
Posted by Noelle Tham at 9:04 PM