I never truly liked Mayuyu (渡辺麻友) before, and always felt she was one of the most “plastic” and plain members of AKB48, but I’m having the opportunity to watch her latest drama, “Tatakau! Shoten Girl” (戦う！書店ガール), and acknowledge how she matured as a singer, actress and aidoru (in a more general way). Besides acting convincingly, the charismatic Mayu is really pushing herself singing live and in key on TV shows like “Music Fair” (something most of her colleagues from AKB48 are not able to do). She just needs to have a better repertoire, as I just remember one really good song from her discography: “Hikaru Monotachi”.

“Hikaru Monotachi” was Mayu Watanabe’s third single, released in November 2012. If I hadn’t watched it alongside the music video, I would easily consider it a Vocaloid song. Not that I’d be totally wrong, as the song was arranged by Hachiouji-P (八王子P), a famous Vocaloid producer, but we all know Mayu is a real girl (some “outsiders” in the comment section of the video that didn’t know Mayuyu before were really confused whether she was a human or a Vocaloid character).

The arrangement is pure happy Technopop, something we can always expect from Vocaloid songs, but the chorus, anchored by the way Mayu sings the line “hikaru monotachi”, is also pretty nice. Having listened to other Mayuyu songs before, I was really surprised to see how pleasant this song ended being. In the end, it conquered a spot in my personal “AKB48-related stuff” playlist.

As a side note, I read somewhere that Yasushi Akimoto (秋元康) considers Mayuyu to be something like the real, true, quintessential aidoru. Personally, I agree with the boss, although she always seemed a little bit forced. However, in one of the episodes of “Tatakau! Tensho Girl” I’ve watched so far, I can tell how truly captivated I was with Mayuyu’s smile... for the first time ever. She just earned my respect!!!

“Hikaru Monotachi” reached #1 on the Oricon charts, selling 122,381 copies. Lyrics were written by Yasushi Akimoto, while music was composed by Shintaro Tanabe (田辺晋太郎). As for the arrangement, Vocaloid producer Hachiouji-P was the responsible. 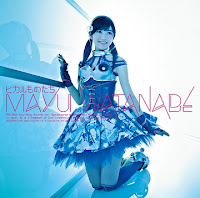