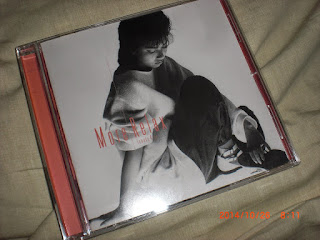 Yup, I think this is one of those songs that fits perfectly with the weather. I was listening to a best compilation of Tomoko Aran's（亜蘭知子）hits, and I realized that during the 80s when she was the most active in singing as well as songwriting. she was dabbling in a few genres as she entered the 90s. There were her contributions to City Pop in the early part of the decade followed by a dip into American-style dance pop (Reimy/麗美 and Junko Yagami/八神純子) were two other singers who would follow suit at around the same time) and then going into the next decade, she would come back musically into Japan with a different urban contemporary pop sound with mellower synths.


Aran's "Hitonatsu no Tapestry" (The Tapestry of One Summer) from her 1983 album "Fuyuu Kuukan"（浮遊空間...Floating Space）kinda straddles the line between City Pop and funky R&B on the West Coast. I couldn't help but feel a bit of Dazz Band on hearing the synths, and of course, there is that boppy bass. Masatoshi Nishimura（西村麻聡）, later of the band Fence of Defense, came up with the oh-so-80s music while Aran provided the lyrics.

And those lyrics talk about a night of subtle debauchery through Mona Lisa smiles, blue cocktails and dedicated leering (yup, they are straight from her lyrics) with the ending verse talking of the morning after when everything seems to have faded into half-remembered memories. As they say, what happens in Vegas stays in Vegas, although I wonder if Aran could have been talking about Roppongi on a Saturday night.

The singer-songwriter also came up with the words for all those fun-in-the-sun tunes for TUBE so I gather that she was able to take all that night feeling and turn it to a somewhat more innocent thing during the daytime for that band. That would make for an interesting analogy: Aran goes to the beach by day, hits the discos at night.

Perhaps the only bugbear that I might have about "Hitonatsu no Tapestry" is that Aran herself doesn't have as strong a vocal presence as some of her contemporaries, so I would have loved to have had someone like Yagami take the song on.
Posted by J-Canuck at 7:49 PM