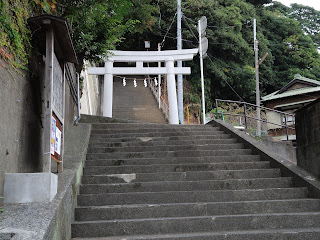 A few days ago, one of my friends introduced me to her fellow odori dancer who was searching for a song that she could perform with at a future Wakayama Kenjinkai（和歌山県人会）event. For people who may not know what a kenjinkai is all about, it's basically an association consisting of ethnic Japanese in Canada, the United States and elsewhere who share a common lineage according to their ancestral prefecture in Japan. I've heard that the Wakayama Kenjinkai in Canada is fairly large from my parents since all of us have roots in the province immediately south of Osaka.

The dancer asked me if I knew of any old kayo related to Wakayama Prefecture. Aside from "Kumano Kodo"（熊野古道）, a song about the World Heritage site in that area by Kaori Mizumori（水森かおり）, I couldn't come up with an answer right away. However, I did a bit of searching about and realized that there were a few of them. Also I found out that a couple of bigwig enka singers were also born in Wakayama such as Toshimi Tagawa（田川寿美）and the legendary Yoshimi Tendo（天童よしみ）.


One of those songs happened to be "Wakayama Blues" by Kiyono Koto（古都清乃）. Now, everyone who is fairly well versed in Japanese kayo will probably figure out quickly that the song is a Mood Kayo from the title including the word "blues", the chorus and the forlorn saxophone playing out there.

The setting this time is the Burakuri-cho Shotengai（ぶらくり丁商店街）, a shopping and entertainment district in Wakayama City. Koto's 8th single which was released in September 1968, became a huge hit for the singer (who was actually born in Gunma Prefecture as Yoko Kondo/近藤陽子 in 1947), selling over 800,000 records, and it did put Wakayama Prefecture on the map, figuratively speaking. The lyrics were written by Shizuo Yoshikawa（吉川静夫）and the melody was by the veteran Tadashi Yoshida（吉田正）.


In my case, my image of Wakayama Prefecture had nothing to do with the urban parts at all. Whenever my family went over there, it was to visit my grandparents an hour south of Wakayama City by train in a very small village. It was nothing but farmland and humongous insects (thank you most kindly, Wakayama, for my several years of arachnophobia) out there, and since I had only been there during summer and winter, I got to experience the extremes of climate. The torrid summers most everyone who's been to Japan would know, but at the end of the year, my neck of the woods near Shirahama was always buffeted by high winds so even though there was no snow, there was a definite wind chill factor.

Methinks that a nice tokkuri and ochoko of sake would have helped during those wintry days in Wakayama more than the basket of mikan.
Posted by J-Canuck at 1:52 PM