This morning, I saw something rather unprecedented on NHK's "News Watch at 9". I saw the news program devote over half an hour of its hour-long coverage to something that wasn't political, economic or meteorological. Instead, the broadcasters and commentators were all gushing about a self-effacing teenage boy who just happened to win his 29th consecutive shogi match, breaking a record. In fact, part of the reason that there was such a full-court press was that the match was in the middle of its endgame during the broadcast so that NHK and perhaps other channels could catch the moment when 14-year-old shogi wunderkind 4-dan Souta Fujii（藤井聡太）confirmed his status.

Perhaps the only thing I could think of here that would be equivalent to the media hysteria surrounding Fujii and his achievement was probably when Toronto's No. 1 NHL draft pick from 2016, 19-year-old Auston Matthews, proved his worth right in his first hockey game with the big boys and scored 4 goals against Ottawa last October. Boy, were folks in Canada chattering the next day. But even that didn't extend to 30 minutes on the telly.


So here I was thinking about how I should pay some tribute to Fujii. Well, the obvious choice was "Osho"（王将）by Hideo Murata（村田英雄）but Noelle has spoken up about that enka, and since I couldn't really find any other shogi-themed kayo, I decided to check out the wunderkind's home prefecture of Aichi whose biggest city is Nagoya.

It didn't take me too long to track down a kayo related to that city (although Fujii was actually born and raised in Seto City in Aichi Prefecture). I just so happened to find "Shiroi Machi" (White City) by Yujiro Ishihara（石原裕次郎）. The Tough Guy is definitely one for geographical kayo with him singing the Japanese blues in Yokohama and Tokyo, and this time, his ballads have brought him to Nagoya. "Shiroi Machi" was written by Naoya Uchimura（内村直也）and composed by Shinichi Nozaki（野崎真一）as a song for Ishihara in October 1967 and has him singing about another love in Nagoya.

It's another one of Ishihara's Mood Kayo tunes but the notable thing about is that instead of the customary saxophone greeting the listener, it's actually a clarinet doing the honours before Ishihara starts crooning. For me, the feeling is that of having a drink in an even classier and older nightclub. I have to admit though that I am biased since I did play the licorice stick for a few years back in junior high school.


Nagoya was one city that I did visit a few times during my odyssey in Japan and it takes about a couple of hours by Bullet Train from Tokyo. At times, I did hear that the city used to get short shrift when compared to bigger metropolises such as Tokyo, Yokohama and Osaka. However, from personal experience as a foodie and as a visitor, I think it's great for its unique dishes such as ten-musu (little shrimp tempura squished into rice balls), miso katsu (deep-fried pork cutlet slathered in a miso sauce) and their own version of tebasaki (sweet-and-savory chicken wings). An old friend of mine was born and lived there, and she took me to a lovely hotel in the downtown district of Sakae for a dessert buffet while a jazz duo was playing.

Well, perhaps my tribute is somewhat oblique to the kid's shogi achievement but still all of my respects to him in his career. To be honest, I am actually more partial to I-go than shogi but even with that former game, I couldn't quite figure that one out either. 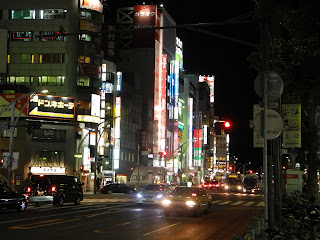