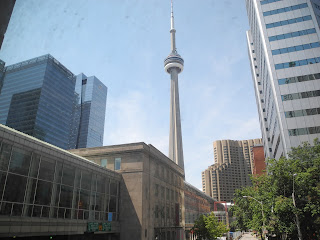 I've found that over the decades, certain singers/musicians held sway over a certain number of years whether it be Seiko Matsuda（松田聖子）during the early 1980s, Tetsuro Komuro（小室哲哉）for much of the 90s and Hikaru Utada（宇多田ヒカル）for those years going into the 21st century. And I'm not saying that it was just those artists alone for those periods. Of course, Akina Nakamori（中森明菜）, Namie Amuro（安室奈美恵）and Misia among others also held the media gaze during those times.


Then, there was Angela Aki（アンジェラ・アキ）. Without looking it up, I couldn't remember when she first burst in on the J-Pop scene but for a time, she was a familiar figure on TV and probably one of the most down-to-earth-looking singers that I had ever seen. In her glasses, jeans and baggy T-shirt, she came off looking like the most comfortable college student that I could have witnessed sipping back a cuppa at a cafe in my university or cramming for an exam in one of the stacks.

One of her most famous songs was her debut single in September 2005, "Home". At the time, I wasn't quite sure what the J-Pop trend was; I think it was just before the alphabet aidoru groups started sprouting and perhaps the J-R&B boom from the turn of the century was beginning to wane somewhat. However, I think "Home" perhaps hit an endorphin-stuffed nerve in the country. From what I've read so far about the single was that it hadn't been part of any commercial tie-up so it was a fairly slow launch but the word-of-mouth started building about Aki's glorious vocals from her hometown area of Tokushima Prefecture.

Perhaps it had also been a while since a Japanese pop song with strong vocals and merely a piano made waves. With all of the production values and computer technology that were force-fed into a recording, something like "Home" made for a very refreshing revelation...again. And Aki had a number of influences ranging from Janis Ian, Coldplay and Fiona Apple to Ringo Shiina（椎名林檎）, Sarah McLachlan and Joni Mitchell. With those last two artists being from my country, I would proudly like to shout "Oh, Canada"!

"Home" did have that feeling of home, thanks to Aki. Some of those artists that I mentioned in the previous paragraph were familiar figures on the radio back when I was a kid. And perhaps she has already done so, but I could imagine Aki covering Mitchell's "Help Me" (although one commenter for one YouTube video of the song remarked that perhaps only Mitchell could do it justice) or even Ian's "At Seventeen". In fact, the coupling song to "Home" happens to be Ian's "Will You Dance".


Eventually, Oricon took notice and "Home" peaked at No. 31, and perhaps even more importantly, Aki was invited onto the 2006 Kohaku Utagassen to perform that very song. The singer would have her consecutive string of appearances on the New Year's Eve special from 2006 to 2011.
Posted by J-Canuck at 3:15 PM