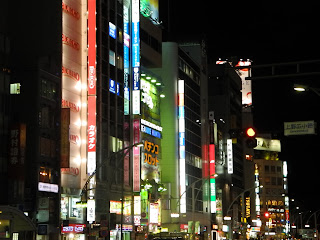 For all of you kayo fans of a certain age, do you remember Kenji Sawada's（沢田研二）"TOKIO"? It was all sorts of musical fun regarding the wonders of the largest city in Japan. With a bit of techno infused into the pop and rock, it just seemed to advertise Tokyo as that dream-like gleaming technopolis.


Well, several months after the release of "TOKIO", rocker Shogo Hamada（浜田省吾）decided to speak up and say "Whoa, dude! It ain't all strawberries and cream here." As a result, he came up with "Tokyo", his 11th single in October 1980.

Compared to the cute and slightly technopoppy "TOKIO", Hamada's answer song (which he wrote and composed) is its brassy and brawling cousin from Kabukicho. The singer-songwriter puts in a goodly amount of reasons for folks living out in the countryside to sigh relief that they are not living in Tokyo: prostitution, exhausted commuters coming home on packed trains and some other sordidness in the big city. But Hamada doesn't frame this in a slow and downbeat melody. On the contrary, the music is as upbeat as the one for "TOKIO" but with a darker side, and drivers bombing down the highway will like to rock their heads and sing to it. Especially love the horns and drumming.


The above video has a Hamada copy band, J. Club, providing a cover of "Tokyo". I don't know how the single did on J-Wiki but the album that it also came on, "Home Bound", from October 1980, peaked at No. 20. It was released in the same month as the single.

The impetus for the article and my interest in the song is from commenter Arc who has started getting into Hamada's music. And as per Arc's request, I've provided a translation of the lyrics.

Some girl is selling her body in the back alley
Kids are making gangs and searching for prey
Sprawled out poolside, full of money, and looking for work on the midsummer streets
People just hanging out...oooh
Oooh, how long can you hold out?
A bed is creaking beyond the wall
The TV is shouting out at full volume below the floor, Tokyo
Don't twist me around, Tokyo
Don't tear that girl apart, born under the expressway
Dying over the subway, Tokyo
Don't overdecorate yesterday, Tokyo
Don't paint over tomorrow, Tokyo

The exhausted faces on a packed train
Children are getting crushed in school
Loneliness is being bartered under the neon, the old people
Say nothing in the middle of their despair....oooh
Oooh, how long can you hold out?
Engines are roaring beyond the window
Ultra-low jets are flying over our heads, Tokyo
Don't come after me, Tokyo
Don't shake that girl, falling in love with her at the disco, making love to her in the hotel
Saying goodbye to her at the drive-in, Tokyo
Don't blame it on the times, Tokyo
Find the light, Tokyo
Posted by J-Canuck at 4:19 PM