Everyone in my family got a surprise over breakfast this morning when it was announced on NHK's "News at 9" that vivacious actress Yoko Nogiwa（野際陽子）had passed away from lung cancer at the age of 81 the day before yesterday. Obviously, she wasn't exactly a young person but when someone from the entertainment industry becomes as much of a familiar presence as Nogiwa did through her appearances on dramas, talk shows and variety shows, it still transmits a shock on finding out that she has left this mortal coil.


As you can see from above, Nogiwa was also very prevalent in commercials. My default impression of her was of a very elegant and courteous lady but with a core of iron which wouldn't allow her to suffer fools very gladly.


What I only found out recently was that her first few years on TV had been spent as an NHK announcer (1958-1962) before she decided to go into acting. After that, she became known as an action girl (!) along the lines of Diana Rigg's Emma Peel from the British spy series "The Avengers" perhaps starting with the 1960s "Key Hunter"（キイハンター）, a Japanese show that tried to emulate the feel of series such as "The Avengers" and the original "Mission: Impossible" from America. It was quite the revelation to see a young Nogiwa looking quite the fashion plate of the times while kicking all sorts of butt.

The lead guy was Tetsuro Tanba（丹波哲郎）who had been Japanese spymaster Tiger Tanaka on the 007 entry "You Only Live Twice". He played Tetsuya Kuroki（黒木鉄也）, former intelligence agent-turned-leader of this motley special missions force which included Nogiwa's Keiko Tsugawa（津川啓子）. Tanba would become a star of another famous special good-guy unit show "G-MEN★75", interestingly enough, as another leader with the same last name as his "Key Hunter" character. Not sure whether the producers had wanted to bring in the same mystique surrounding Patrick McGoohan when he played spy John Drake on "Danger Man" and then "No. 6" on "The Prisoner"; there still is some wonder whether the two characters were one and the same.


Anyways, let's get back to Nogiwa. The opening theme for "Key Hunter" was this typically 60s spy show-sounding instrumental of intrigue. Imagine guns and go-go boots. The ending theme was the sung version of the opening theme, "Hijo no License" (Extraordinary License), and the singer was indeed Nogiwa. As far as I could see on Nogiwa's J-Wiki article, this was most likely her only record, and to be honest, I can understand why. I mean, she hit the notes but I think as a singer, she was a far better actress. And judging from the comments I've seen on YouTube and Mixi over the last several hours, she will be missed. I'm not a religious person but perhaps the afterlife just gained a bit more in class.

Jun'ya Sato（佐藤純弥）wrote the lyrics while Shunsuke Kikuchi（菊池俊輔）came up with the music. Kikuchi would also come up with the famous theme song for "G-MEN★75". 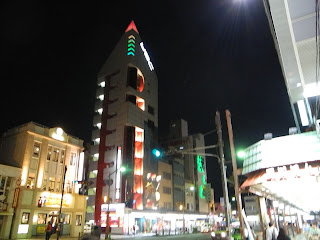