Continuing with the 48th Omoide no Melody's second segment. I've noted that there were more stuff from the remaining hour that were unfamiliar, but a mix of songs that were likable and a curiosity about the singers who sung them kept my attention from wandering. 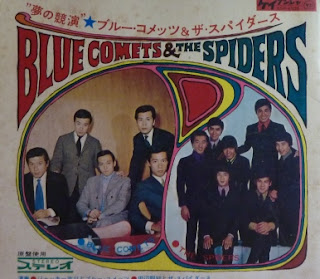 Restarting the summer Kohaku was a Group Sounds special, which was my favourite part. This genre's golden years were in the 60's and, of course, there were many hits spawned from the GS bands that were all the rage at that time. None of the bands were in full attendance on the stage and a mishmash of members from those bands collaborated to perform those hits instead. I didn't mind though, and it was like the seeing the elderly Mood Kayo All Stars... Elderly Group Sounds All Stars... Woohoo!

Leading the pack were funny guy Masaaki Sakai (堺正章) and the cute Jun Inoue (井上順), both in red marching band outfits and from The Spiders. The incredibly cool in shades Jackey Yoshikawa, and his Blue Comet, Tsunaki Mihara (三原綱木), were present. Then there was Hideto Maki (真木ひでと) from Ox whom I thought looked like modern-day Shinichi Mori. And lastly (I think) was the seemingly imperturbable Katsumi Kahashi (加橋かつみ) from The Tigers, who maintained a stony expression throughout even though everyone was in high spirits - I find it very hard to imagine that he was in the same band as the flamboyant Julie.

The songs performed (one or two from each band) were all fun and listenable, but my favourites have to be the GS staple,  Blue Comets' "Blue Chateau" - can't get enough of that intro, and the high octane number "Bang Bang Bang", with silly dance moves, by The Spiders. The latter served as a energetic finale to the special.

Anyway, time to step into some unfamiliar territory with two artistes. First up, Yasuko Naito (内藤やす子). With her bohemian style and hair like Queen's Brian May, I had her mistaken for Yuki Katsuragi (葛城ユキ) until it was her time on stage! That aside, it was highlighted that Naito has made a comeback this year after sickness had put her out of commission for quite a long time. Her husband was present in the audience for extra moral support. The song that people had requested from her was "Roppongi Lullaby" (六本木ララバイ), which surprised me for sounding like a Mood Kayo tune; her husky delivery only made it more Mood Kayo-y. It's definitely got my seal of approval. I can imagine someone like Kiyoshi Maekawa tackling this.


Next up is Ichiro Araki (荒木一郎). While I am aware of him via Hiroshi Tachi's (舘ひろし) cover of  "Itoshi no Max" (いとしのマックス) - potential future article - I can't say that I know anything more about this singer-songwriter. Despite that, he did grab my attention when he stood beside Hagimoto and Takahata for a brief interview. The best way I describe how I felt was Takahata's simple comment: Kakkoi sunglasses... Kakkoi indeed... I expected "Itoshi no Max" to hit my ears since Araki exuded the coolness the song requires with just those shades alone, so it was honestly a little disappointing when "Sora ni Hoshi ga aru youni" (空に星があるように) was sung instead. Well, at least it his delicate and slightly jazzy debut single was pretty decent.

Moving on, with the topic of stars in the night sky in mind, Rokusuke Ei's (永六輔) proper, more solemn tribute was in the form "Miagetegoran Yoru no Hoshi wo" (見上げてごらん夜の星を). Kiyoshi Hikawa (氷川きよし), who did a good job with it, had the honor of presenting it to the lyricist who's now together with the stars above.

Enka came back into the scene towards the end of the Omoide no Melody in conjunction with the topic of family, so Aya Shimazu (島津亜矢) gave her powerful rendition of Hideo Murata's (村田英雄) sweet "Meoto Shunju" (夫婦春秋). After that Yoshimi Tendo (天童よしみ) made her appearance at long last by crooning "Ai San San" (愛燦燦), a number by the great Hibari Misora (美空ひばり) - you can always count on Tendo when it comes to Misora's songs. Again, Mom would've loved that.

Taking the coveted last spot on the show before the final sing-along (forgot the song) was Saburo Kitajima (北島三郎). This was the second time he performed, the first being before the break. While it was definitely awesome to see him warble out "Kita no Ryoba" (北の漁場) on a giant animatronic fishing boat (it wasn't the S.S. Sabu...) with Takashi Hosokawa (細川たかし), Hikawa, Hiroshi Miyama (三山ひろし), and Keisuke Yamauchi (山内惠介) as his crew, it was this round in particular that I found the most memorable.

I've always said that I'd want to see good ol' Sab's singing the dramatic "Fusetsu Nagare Tabi" (風雪ながれ旅) in a confetti blizzard at the Kohaku, so to a certain extent, my wish was granted; after all,  Omoide no Melody is called the summer Kohaku from time to time, so it's as close as I can get to the real deal. They were really sparing no expense on the white confetti this time as it stormed down on Sabu-chan in his white kimono and dark blue hakama. I kinda pitied him as the bits of paper attacked his face and he had to spit out one out ever so often, but at the same time I was laughing at the spectacle.

That's the end of my 48th Omoide no Melody review. It really was a good edition. Oh yeah, here's a picture of Araki in sunglasses, just because. He sort of looks like Akira Terao (寺尾聰) from 1980.