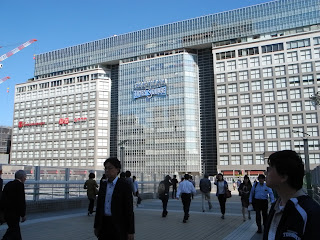 When I first came to live in the Tokyo area in the mid-1990s, Shinjuku was separated into the gleaming skyscraper area in West Shinjuku and the raucous and slightly grimy East Shinjuku with all sorts of bars, restaurants, department stores and red-light facilities. But about 10 years ago, South Shinjuku suddenly came alive starting with the Takashimaya Times Square complex, and even since my last visit, I've read that things have further developed in the area. But all things start from that central hub, Shinjuku Station.


And I've got a song about that place and by one of the big guns in enka himself, Hiroshi Itsuki（五木ひろし）. In fact, this was his debut as a teenager back in 1965. The thing is, though, that he didn't debut as Hiroshi Itsuki.

To explain, a few nights ago, I wrote an article about singer Shigeo Kusunoki（楠木繁夫）who was known to have 55 stage names. Well, although Itsuki didn't start his long and illustrious career amassing stage names like a stamp collection, he did have a few professional aliases before he finally settled on his most famous name. Born Kazuo Matsuyama（松山数夫）in 1948, he debuted as Masaru Matsuyama（松山まさる）and that debut song was "Shinjuku Eki kara" (From Shinjuku Station).

Written by Tetsuya Furuno（古野哲也）and composed by Gento Uehara（上原げんと）, "Shinjuku Eki kara" may start out like a Mood Kayo but since the lyrics talk about a trip from Shinjuku Station back to the ol' hometown in the countryside, it quickly reverts to an enka style. The above video is of an Itsuki performance from 2004 on the cusp of his 40th anniversary in show business where he sang all of his very early songs under those various pre-Itsuki names. I was quite impressed actually. I didn't really expect Itsuki to cover all those tunes since they were not only not under his most established name but it didn't look like any of them became hits before his big breakthrough of "Yokohama Tasogare" (よこはま・たそがれ).


The above is a cover version, by the way. Although the pre-Itsuki output didn't result in any hits, I think any of his tunes back then would be worthy of exploration. For the record, between Masaru Matsuyama and Hiroshi Itsuki, the future superstar also went by the names of Eiichi Ichijo（一条英一）and Ken Mitani（三谷謙）.
Posted by J-Canuck at 2:39 PM