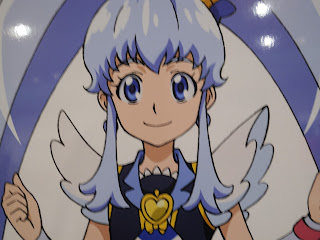 This is one of those songs that just flew in from left field but I simply cannot get it out of my head. I have yet to see the episode it came out on (that will come with the next round of anime with my friend) but it has already made a splash in that certain sector of YouTube.


The anime happens to be "Gabriel Dropout" (ガヴリールドロップアウト) which has become one of my pleasant surprises for this winter season. The opening theme "Gabriel Dropkick" (ガヴリールドロップキック) has also turned out to be an earworm so I'm already feeling a tad disappointed that we're already more than halfway through the series.


Now, as for that left-field song...that pops up in Episode 7. Apparently the devilish character of Vigne (who really isn't) has been using the time-honoured tradition of counting sheep in her own way to get into the land of slumber (personally I'm fine with hot milk and nutmeg). However, instead of sheep, she prefers three-headed cerberi.


It has apparently become a running gag in the episode but it is also an adorable meme that has perked up the ears of fans. The song has even gained a title "Gabriel no Kazoe Uta" (Gabriel's Counting Song) and is sung by Vigne's seiyuu, Saori Onishi（大西沙織）. What sells it is not only the simply gooshy melody by Yasuhiro Misawa（三澤康広）but also Onishi's soft warm blanket of a voice. Some fellow has already put up a long-form looping version of the song so for any of those anime insomniacs, help is on the way!


And the humour goes full blast during the ending credits of the episode with the coda of Vigne's soft snores. This song had better get onto the soundtrack.


Still, even "Gabriel no Kazoe Uta" has a ways to go before it can beat my all-time favourite cartoon lullaby, "The Littlest Lamb" from "The Flintstones". That would be my favourite Ann Margret song.