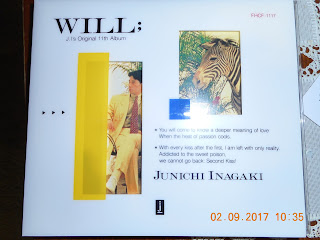 Another weekend is coming to a close. For some reason, a Sunday dinner seems to be conk me out more than the evening meals during the rest of the week so I was in a half-awake limbo for about an hour and a half before ambling over to the computer for another round of "Kayo Kyoku Plus". I was contemplating something nice and comfy from City Pop/J-AOR maestro Junichi Inagaki（稲垣潤一）.


So I came across his 28th single from January 1993, "Boku naraba Koko ni Iru" (If It's Me, I'm Right Here). Incidentally, this was the single immediately following his Xmas classic "Christmas Carol no Koro ni wa"（クリスマスキャロルの頃には）, arguably the song that most people who aren't Inagaki fans per se know him best for.

However although "Boku naraba Koko ni Iru" has that familiar layer of mellowness which often infuses an Inagaki ballad, I wouldn't say that this particular entry is completely relaxing. There's quite a bit more of the screeching electric guitar in there so I had initially mused about categorizing this as a J-Rock tune but I came to the conclusion that that would have been a bit too much of a stretch for Inagaki so I made a compromise and put it in Pop.


As you can see from above, "Boku naraba Koko ni Iru" was used for a Honda commercial although I think it would also have made for a nice theme song for a romance drama on Japanese TV. The lyrics were provided by Yasushi Akimoto（秋元康）and composed by MAYUMI. The reason for the slightly amped-up arrangement here was probably the message of the song in which the protagonist sounds almost challenging in his declaration to the love of his life who may be waffling a bit about commitment. This fellow is completely anchored in his resolve.

"Boku naraba Koko ni Iru" peaked at No. 4 on Oricon and was placed as a track on his 13th album "for my DEAREST" which was released a couple of months later in March. That album managed to rise to No. 2 on its chart, scoring a Gold ranking.
Posted by J-Canuck at 8:45 PM