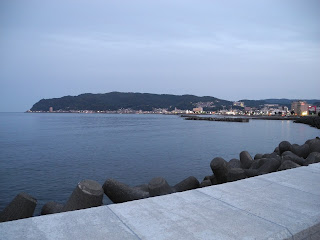 I've seen this singer Yumi Seino（清野由美）on YouTube for the past number of months but did not notice her within the pages of "Japanese City Pop". And although she's not profiled on J-Wiki, she has received some acknowledgement on a Japanese-language music blog that I've referred to in the past, "Music Avenue". Even the writer there has stated that considering her low profile, it would be surprising if any of her presumably 3 albums ever got converted to CD. Well, that article was written over 10 years ago, and apparently someone in the recording industry had a heart and did have at least two of the albums turned into CDs according to what I saw at CD Japan.


For that "Music Avenue" blog entry, the writer kaz-shin mentioned that the first album "U-TA-GE" which came out in 1981 had a sound reminiscent of Akira Terao's（寺尾聡）City Pop classic "Reflections". However, with today's article, I'm going with a track from Seino's 3rd album "Continental" titled "Katamuku" (Leaning In) which was written by Masami Sugiyama（杉山政美）and composed by Seino herself.

Released in January 1983, I found out on another page which gave a short review of the album that her sound had changed. And listening to "Katamuku", I did get the impression that although that City Pop feeling was there, there was also some of that blippity-bloppity technopop sound so my overall impression of the song was something closer to Taeko Ohnuki's（大貫妙子）poppier tunes from around the same time. Maybe there is even a certain amount of EPO tossed in as well.

Also listening to "Katamuku", I wasn't quite sure whether the YouTube video had gotten a good recording especially with the saxophone solo which sounded kinda wobbly. It almost sounded like something from a weird dreamy burlesque show directed by David Bowie. Basically, I could compare the version I've heard here to pineapple on pizza....I can take it just fine (I fully realize that others won't go near the stuff) but there's something a tad odd about a fruit so tangy sweet on an Italian classic. For the record, my favourite slice is pepperoni, although at Pizza Hut, I always like to grab a Meat Lovers'.

I would be interested in getting "Continental" someday in the near future just to listen to it as originally recorded. As for that matter, I want to get that debut album by Seino as well since that reportedly hewed toward the full City Pop. And frankly, if it has been compared to "Reflections", then it has gotten my attention.
Posted by J-Canuck at 8:17 PM