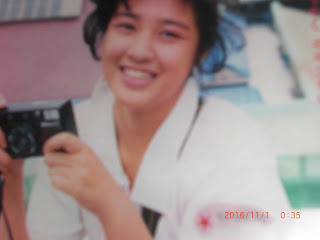 My friend and collaborator JTM wrote an article a few years ago on the band RAMU (ラ・ムー) and their song "Shonen wa Tenshi wo Korosu"（少年は天使を殺す）. He did a great job in talking about the overall amorphous nature of a group that had a mid-80s aidoru in the form of Momoko Kikuchi（菊池桃子）providing vocals with Yoshikazu Matsuura（松浦義和）and Nozomu Nakanishi（中西望）from the fusion group Prism (プリズム) coming in as keyboardist and drummer respectively along with another guitarist and two backup singers. Was RAMU going for a rock sound or was it trying for something R&B? Perhaps it was going for a taste of both via fusion or maybe even late-decade City Pop.

The first time I saw RAMU was on an episode of "The Best 10" when they appeared to perform the aforementioned "Shonen wa Tenshi wo Korosu" presumably (uh...actually, I now have to make a correction on my assumption). Although I certainly didn't have the insights back then that JTM had when he wrote about the song in the blog, I do remember that I was pretty intrigued seeing Miss "Say Yes!" Kikuchi in some pretty slinky clothing singing something that was definitively non-aidoru. I couldn't quite categorize what I was hearing though. So, by the end of the performance, I was going "Uhhh..."

Listening to "Rainy Night Lady" which was the first track on RAMU's only album from September 1988, "Thanks Giving", I can say that I've got a better handle on the music now than when I was still a pretty callow guy of the 1980s. Still, even though the band has been categorized on J-Wiki as a rock group, "Rainy Night Lady" isn't a rock song by my definition. It's perhaps closer to the mellow urban material that Omega Tribe (オメガトライブ) was singing at the time, and that's not too surprising since it was composed by Tsunehiro Izumi（和泉常寛）, who helped out in making two hits for that band, "Kimi wa 1000%"（君は１０００％）and "Aquamarine no Mama de ite"（アクアマリンのままでいて）with Shun Taguchi（田口俊）providing lyrics.


I guess the best way to describe it is imagining Momoko taking the place of Anri（杏里）in one of her 80s songs. Having an aidoru like her with those high-tone vocals fronting RAMU might seem a bit odd but from working on this blog over the past 5 years, I have realized to my surprise that the singer had been performing City Pop-like tunes for her albums when she was an aidoru in contrast with those aidoru singles that she sang on the music shows. Perhaps recruiting her into RAMU may not have been completely out of left field.

I don't know how "Thanks Giving" did on the charts although I can imagine that it did get somewhere on the charts due to Momoko's fame. Still, RAMU had a short shelf life and perhaps acquiring that lone album would be quite interesting for an 80s Japanese music guy like myself just to hear what they were trying to accomplish musically.
Posted by J-Canuck at 9:56 PM