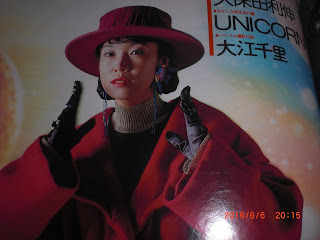 Happy Monday! For me, Yuming's (ユーミン) best days ended sometime in the early 90s, at least where her albums were concerned. Now, some might say that I've being overly generous while others may posit that I'm being a little harsh, but that is where I stand.


Still, her singles and albums up to the present have still been hitting the Top 10 on Oricon, and I have to admit that some of the singles that have come out from the 90s onwards have resonated to a certain extent. Case in point, "Sunny day Holiday", Yumi Matsutoya's（松任谷由実）31st single from November 1997.

At the time of its release, it got some pretty heavy rotation on TV at least since I could pick up on the melody immediately when I heard it again after so many years. I did get the album that it appeared on "Zuvuya no Nami"（スユアの波...Wave of the Zuvuya）, her 29th original release from December 1997 but I only listened to it a couple of times before it was placed on the shelf not to be moved again (perhaps I'll have to give it another try). I do remember talking with an old friend about the album not long after "Zuvuya no Nami" was released, and we both agreed that it was kinda meh.

Listening to "Sunny day Holiday" again, though, I also have to say that it is a pretty nice pop song through the ears of nostalgia although it's not up at the same level as past classics such as "Ano Hi ni Kaeritai" (あの日にかえりたい). Her lyrics are also sweet as she portrays a man verbally gushing out his love and gratitude to the woman in his life despite any of his idiosyncrasies. As the key lyric goes: "Kimi wa Sunny day, boku no Holiday" (きみはSunny day, ぼくのHoliday...You are a sunny day, my holiday).

"Sunny day Holiday" was also the theme song for a 1997 Fuji-TV drama "Narita Rikon"（成田離婚...Narita Divorce）starring SMAP's Tsuyoshi Kusanagi and Asaka Seto. On Oricon, it peaked at No. 10.
Posted by J-Canuck at 8:13 PM