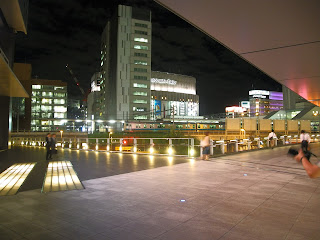 I don't get to see it all the time but on TV Japan on Sunday nights, there is one of those educational variety programs that NHK is renowned for showing called "Tanken Bakumon"（探検バクモン...Expedition Bakusho Mondai）featuring the veteran comedic duo Bakusho Mondai（爆笑問題）in which the fellows accompanied by tarento Sahel Rosa (サヘル・ローズ) and a production crew explore the more fascinating sights and sites of Japan that perhaps most citizens aren't aware of. When I do get to see the show, it's usually quite comfortable viewing with the occasional lunacy from the guys.


The English title for "Tanken Bakumon" happens to be "Deep Inside", and so on coming across the cool tune by Shibuya-kei band paris match, I couldn't help but be reminded of the show since it also possesses the title "Deep Inside". Released in November 2001 as paris match's 4th single, it makes for a nice accompaniment for walking through neighbourhoods such as Aoyama or Omotesando in Tokyo. It's something nice and groovy for that weekend stroll. Perhaps I should invest in that ancient Sony Walkman next time I hit the megalopolis and slip in a paris match disc.


And once again, I have to give my kudos to Artzie Music for providing his remix of the song for one of his video creations. Kinda feel sorry for the high school student during cherry blossom season, though. Getting a heart broken during that time must really suck.
Posted by J-Canuck at 8:40 PM