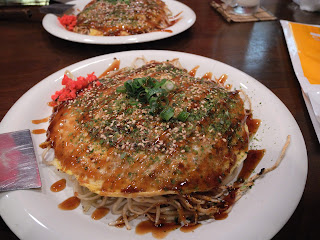 Wasn't expecting to put up a third article tonight but I heard a bit of this really snazzy Mood Kayo on an NHK program just now, and I simply had to mention it before I forget it. And no, it wasn't a rerun of "Uta Kon" (うたコン). It was actually the weekly edition of "Gatten" (ガッテン), that midweek educational program. Strangely enough, the theme was about how one's larynx could signal a potentially fatal aortic aneurysm, and somehow some karaoke got into the mix with this lady cheerfully singing the song of this article.


And that would be "Osaka Mambo" by Yuuko Maki（真木柚布子）. I had never heard of her before so I am wondering if she is a regional enka singer. She doesn't have a J-Wiki article but she does have a nice website so I was able to glean some information. For example, "Osaka Mambo" was her 14th single from July 1998.

I do like the song since the horns go all out for the Latin jazz and the singer herself is very devoted to the delivery. Written by Hajime Tateishi（建石一）and composed by Masato Sugimoto（杉本真人）, the brash and colorful "Osaka Mambo" matches the feeling of an evening out in the Kansai metropolis. Lots of light and noise out there.

From what information I could find on her website, Maki is an enka and Mood Kayo singer who originally hails from Hokkaido who made her debut in 1989 and has released 44 singles up to now. Her idol happens to be Hibari Misora（美空ひばり）and pretty much loves all sorts of food although her particular love is for the various kinds of noodles.


Get more into the mood with this karaoke video.
Posted by J-Canuck at 10:13 PM