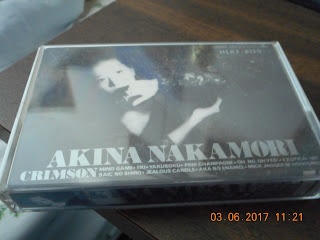 As a sequel to an article that I wrote back last Saturday, "OH NO, OH YES!", I dug out my audiotape of Akina Nakamori's（中森明菜）10th studio album "Crimson". It was actually found deep in a collection of tapes in my middle drawer in that chest of drawers in my room. I've pointed it out before in "OH NO, OH YES!" and in a couple of comments that I hadn't been all that impressed with the album when I first bought it at Wah Yueh back in the late 1980s. Perhaps my opinion might be surprising considering "Crimson" hit No. 1 on the Oricon charts and, in fact, was the 3rd-ranked album for 1987 (it was released on Christmas Eve 1986). Plus, it had all that songwriting talent behind it including songsters Mariya Takeuchi（竹内まりや）and Akiko Kobayashi（小林明子）.

The truth of the matter was that I hadn't been ready for this new-at-the-time Akina Nakamori who produced a number of her own albums to reflect a more mature pop sense, somewhat different from her Oricon-friendly singles. And as I said before, for a few years during that decade, her singles and her albums were kept apart.

However, after listening to "OH NO, OH YES!", it looks like my brain and my appreciative senses have finally caught up to what Akina was doing back then. So I took out the tape for the first time in ages and plunked it into my tape recorder that I have dubbed Jaws. I listened to Side A and was quite delighted by what I heard. I didn't roll my eyes once as I re-discovered what the pop superstar was singing. Next, I turned it over to Side B.

I apologize for the grisly nature of the photograph but death was made official at 2:10 pm on Monday March 6th. Jaws can get pretty peckish at times and it decided to make a meal out of "Crimson". I knew when Akina started to sound like she had recorded "Exotica" after downing a jug of Chez Thunderbird that the end was nigh. And sure enough, I pulled out one mess of ruined magnetic tape.

But was I upset? If this had happened 30 years ago, I probably would have gone through the ceiling. Now...not so much. Nakamori has become such a legend in the world of J-Pop that I wouldn't have much of a problem tracking down a CD of "Crimson", and there are quite a few YouTube videos of the tracks so that I can still talk about the album today. However, if you would like to observe a minute of silence for my late tape, I will wait patiently...


Fine. From my memories of playing "Crimson" for the first couple of times on a less tape-i-cidal recorder, there are a few songs that have stood out. One is the first song itself, "Mind Game" which was written by Eiko Kyo (許瑛子...who had also been responsible for the lyrics for another Akina hit "Sand Beige") and composed by Akiko Kobayashi. Seeing Kobayashi behind the melody here, I was surprised since I had always envisioned her as the singer with the Karen Carpenter-like voice singing Karen Carpenter-like songs, and yet this sounded like a pretty saucy tune. But then I remembered that Kobayashi had started out as a vocalist for a rock band.

Anyways, that video above showing her in the dark outfit and glasses nicely sums up about what the number is about. With the electric guitar and the synth providing the musical milieu of the singer strutting out in the downtown areas of Tokyo, safe and not-so-safe, "Mind Game" actually seems to take place in the lass' apartment, and before listeners assume some sort of CIA intrigue because of the title, it's more of Akina playing the puppet master here.

The lyrics hint at being loved by a number of suitors and yet she is bored by all of them. Perhaps she'll string them along a little while longer before cutting the wires permanently. In a way, if Momoe Yamaguchi（山口百恵）had continued her career up into the mid-1980s, maybe this could have been the type of song she would have sung since she had portrayed the "I've-had-it-up-to-here" cynical woman willing to go medieval on her errant lover in the last half of her 1970s career. Now, that woman would have been more like "Yeah...like whatever". In any case, there is so much ennui in this song and setting that there just has to be a chaise lounge somewhere in Akina's pad. And yeah, I do like the song now.

Track 2 is "Eki"（駅...Station）which seems to be one of Akina's more famous tunes from the late 1980s. Mariya Takeuchi was responsible for words and music. I had stuffed "Crimson" into the drawer for so long that I had forgotten that this ballad which would pop up on various TV shows and BEST compilations actually had first appeared on this album. It's also one of the first times that I heard the whispery and fragile vocals of Akina as she just stood in a unmentioned station suddenly remembering the final time she saw her former flame. Unlike "Mind Game" and Kobayashi, I could imagine Takeuchi creating and singing "Eki" which she did on her 1987 album "Request".

"Pink Champagne" (ピンク・シャンパン) is a song that I did not remember but discovering it again after so long, I'm happy to make its re-acquaintance. Composed again by Kobayashi and written by veteran lyricist Yoshiko Miura（三浦徳子）, it's a mixture of old (horns) and new (synths) to create this Roppongi soundscape that I could easily imagine Ringo Shiina（椎名林檎）covering. And if I can continue to wear the music sommelier's cap for one more sentence, there is even a bit of soulful Masayuki Suzuki（鈴木雅之）. Again the whispery side of Akina's voice is in play here as she sings about sipping back some of the titular drink after a tawdry night (perhaps a one-night stand) in a neighbourhood of concrete and neon.

The one other song that I remembered from the original playing of the album was the final track, "Mick Jagger ni Hohoemi wo" (ミック・ジャガーに微笑みを...Smiling at Mick Jagger). And it was the only song that I actually liked on "Crimson" back then since I could hear that amazing mid-80s Akina voice again. The only disappointing part was that whole day-in-a-life thing with Akina typing and having that cup of tea/coffee before the song comes into full volume.

Takeuchi was once again responsible for words and music here as Akina extols the love of listening to some old Rolling Stones on the radio-cassette recorder (talk about dating yourself!). Hearing it again, I realized that this could have been another Momoe tune. And to think there would be another song with Jagger in the title many years down the line with Maroon 5.

Well, I guess it's time to track down another copy of "Crimson" but I'm happy that there has been a redemption of sorts. I haven't thrown away the tape, though. "Crimson" will be kept around as a memento of a bygone age. 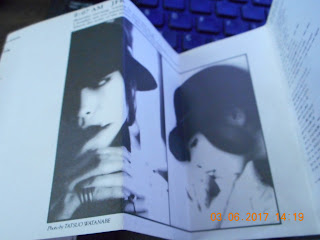