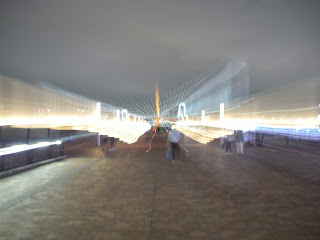 It's been a while since I've posted anything by Tokyo Ska Paradise Orchestra（東京スカパラダイスオーケストラ）so I've forgotten how much these guys can swing. Time to rectify that matter.


So I offer you "Utsukushiku Moeru Mori" (The Beautifully Flaming Woods) which is TSPO's 22nd single from February 2002. Written by saxophonist Atsushi Yanaka（谷中敦）and composed by bassist Tsuyoshi Kawakami（川上つよし）, I'm not sure what the title and the lyrics are quite talking about but I can't deny the kakkoii bounciness of the beat. Plus, they get some smoothly raspy (a weird description, I know) vocals from singer-songwriter Tamio Okuda（奥田民生）from Unicorn. The ska beat is indeed in there but there is also a good dollop of pop to keep things nice and mellow. I like the video as well...nothing too fancy; just all of the performers showing off what they do best.


"Utsukushiku Moeru Mori" went as high as No. 4 on Oricon and ended 2002 ranked at No. 60 going Gold. The single also made it onto the Orchestra's 9th album "Stompin' On DOWN BEAT ALLEY" from May 2002 which hit No. 1 and became the 42nd-ranked album of the year. Pretty nice way to finish a Saturday night.
Posted by J-Canuck at 11:14 PM