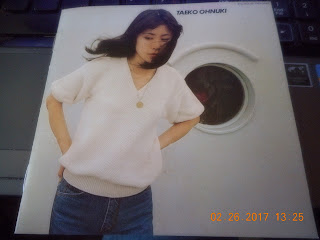 I seem to be doing this with a few of the Taeko Ohnuki（大貫妙子）albums recently...write "Kayo Kyoku Plus" articles about one of them back in the day and then follow up in a future article with a few more tracks from it. But in my defense, Ohnuki is that good. One of my very early articles about her was back in 2012 for her 1977 album "Sunshower" in which I gave a quantitatively paltry account although the two songs I featured were and still are high quality.

Well since then, I've also gone on to write about a couple of other tracks from "Sunshower" separately, the cheeky but relevant "Kusuri wo Takusan" (くすりをたくさん) and the soulful "Nanimo Iranai" （何もいらない）. Before I start going into the other tracks though, I have to mention something which I have yet to state in any of the articles related to Ohnuki's 2nd solo album, and that is I think that cover above is probably one of the more iconic I've ever seen for any of the Japanese pop albums. I tried to look up where the singer-songwriter was when that photo was taken but I haven't hit pay dirt yet.

I still won't be covering all of the songs on the album since there are a few that I would like to cover solo in the future.


The articles on the album and the two separate tracks already mentioned almost cover all of Side A of the original LP. There is just the final song on the side and it's a winner. "Karappo no Isu"（からっぽの椅子...The Empty Chair）at 17:52 on the video is one of those gorgeous bluesy jazz ballads that can be played as you are watching the sun set from your apartment window. And that sax solo by Yasuaki Shimizu（清水靖晃）caps it all off wonderfully. In the write up for the song given in the J-Wiki article for "Sunshower", Ohnuki gave an interview for a magazine back in 1983 in which she described the image of some sort of sudden revelation or epiphany while living alone as the basis for "Karappo no Isu". Looking through the lyrics, perhaps the life alone was a recent development after the end of a relationship. To finish off this paragraph, according to that same article, this was a song that was performed at the final concert for Sugar Babe, Ohnuki's old group with Tatsuro Yamashita（山下達郎）.

The above video, by the way, is for the whole album so I'm just giving the times beside the titles. Track 2 of Side B is "Dare no Tame ni" (誰のために...For Who/27:16) which is another relaxing song addressing vulnerability. Ohnuki created the song to state that it seems that without position and/or accolades, it would be awfully hard for a person to get anything or anywhere in the world, and that to keep on pressing for what he or she wants can be exhausting to the point that it wouldn't be surprising to just scream and flee. Ryuichi Sakamoto and Haruomi Hosono（坂本龍一・細野晴臣）of Yellow Magic Orchestra fame were on keyboards and bass respectively for this song.

I have to say that perhaps the secret to the Ohnuki style is that she seems to have the talent to sing about the everyday frustrations of someone but not make it sound like an emotion-drenched performance begging for an Oscar.


When I first saw the title "Silent Screamer" (Track 3 of Side B), I was slightly taken aback since Ohnuki's old partner, Yamashita, had a funky little piece with the same title. But that was on his 1980 album "Ride On Time". And this "Silent Screamer" which was written and composed by Ohnuki as was the case with all of her tracks is a different animal. It's more in the New Music vein rather than out-and-out slick-as-chromium steel City Pop but it still feels like a song that would befit life in the metropolis. Tsugutoshi Goto（後藤次利）is on the bass that starts things off.

The singer mentioned that "Silent Screamer" was a theme song for that desire to take off anywhere. At the time she created this song, she apparently had a fill-up of this energy that she needed to fire out so I could imagine her hitting the highway in her car and just stepping on the accelerator. However, she was probably just as effective as concocting this uptempo piece. I know that Ohnuki has been a fan of Canada's Joni Mitchell and the urban arrangement of this somehow reminded me of a Mitchell song with the same sort of tone although their respective voices are quite different.


The last song for tonight from "Sunshower" is again up on that video up above for the whole album, and in fact, it wasn't included on the original LP from 1977. In 2007, there was a paper sleeve re-release of "Sunshower" through a commemoration of the singer's time with Nippon Crown (although my copy of the album has the usual jewel case), and one of the two new additions was the B-side to Ohnuki's 3rd and final single for Crown, "Summer Connection" which was also included on the original album. It's called "Heya"（部屋....The Room/49:10）and the singer has said that it is one of her very favourite pieces. From the title and the lyrics, it sounds just like a song that would be perfect for a Sunday afternoon enjoying the daily routine at home.

I know that my infatuation with Ohnuki began with her early 80s technopop/European period and I still love her music there. However, listening to "Sunshower", I have sometimes wondered what would have happened if she had continued for a little while longer on the purely New Music/City Pop track.

Ah, as a little PS here, to give credit where credit is due for all of Ohnuki's opinions on her songs, they all came from an interview that was written up in the Japanese music journal "Music Steady" that was published on October 30th 1983.
Posted by J-Canuck at 10:22 PM