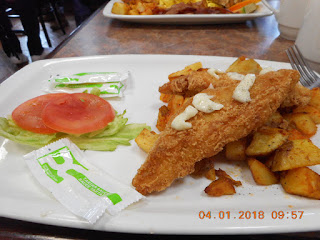 Me and fish n' chips go back a long way. When my family lived further downtown, we often went to a fish n' chips store which was located just around the corner from our apartment building. It was run by a Greek family, and for those Canadians and Americans who can remember the classic Olympia Cafe sketch on "Saturday Night Live" from the 1970s with John Belushi and Bill Murray, I remember it being very much in the same way in terms of how the guys behind the counter took care of the customers. For the record, I wouldn't find out about tartar sauce for decades; it was all salt and vinegar for my halibut.

The fish n' chips there were batter-fried and I recall that the ratio of batter-to-fish tended to stray toward the batter side, but as a kid who was ravenous about food, I surely didn't complain, and the fish inside was indeed halibut. To this very day, I subconsciously compare any fish n' chips, whether at a restaurant or brought home to stay in a freezer, to the fare from that Greek place on Howard St. So far, the best place has been The Olde York.


Anyways, I was tickled pink to find out that the vocal group Hi-Fi Set（ハイ・ファイ・セット）actually sang a song titled "Fish and Chips" from their debut album "Sotsugyo Shashin"（卒業写真）, released in February 1975. As opposed to the mellow tones of the classic title track, the Set decided to bring in a little more American sole...er, I mean soul into the proceedings for "Fish and Chips". They also must have needed many Sucrets lozenges after the recording considering how high their voices were pitched. But their laryngeal sacrifice has been noted by me since listening to it rather gives me that image of walking down a New York avenue on a sunny day.

"Fish and Chips" was also on the menu for Hi-Fi Set's 2-disc live album "Collection" from 1989. Unfortunately, I couldn't find out who were behind the lyrics and music. I like this live version of the song because of that brassy interlude, and basically the whole song has been given some really high energy.
Posted by J-Canuck at 10:27 PM