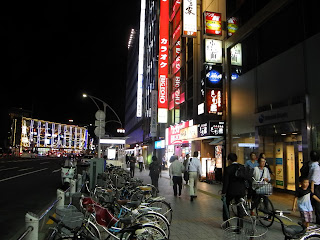 It's Friday night....let's start off with a bit more shibui, shall we?


I'm sure that there must be at least some folks residing in the northern prefectures of Japan who sometimes wring their hands in frustration about why their homeland has perennially gotten chosen as the place where romance dies. I mean, as expressed through kayo, it's a beautiful death, but still, it just seems as whenever a poor fellow or lady has broken off a relationship (short or long), he/she may have that penchant to head for Aomori or Hokkaido or Iwate. Perhaps it's the snowy environment...autumn has usually been the season for relationships to go south; maybe winter is the time for the post-mortem.

Anyways, enough theorizing. As I said, let's go with something shibui and lovely at the same time. I've got Masako Mori's（森昌子）37th single from July 1981, "Kanashimi Honsen Nihon Kai" (Sorrowful Main Line Along The Sea of Japan). Listening to this atmospheric kayo, I think it's as shibui an enka as Akira Terao's（寺尾聡）hit "Ruby no Yubiwa"（ルビーの指輪）was as shibui a City Pop tune, and both came out in the same year.

Written by Toyohisa Araki（荒木とよひさ）and composed by Keisuke Hama（浜圭介）, it's designated as an enka but the arrangement by Koji Ryuzaki（竜崎孝路）, who also dabbles in R&B and general pop, suggests something beyond the Japanese shores, especially with the instrumental bridge. Mori sings about a final message to her paramour and wondering if he will cry for her once all is said and done. I think there is something about a lonely ride on a train heading north along the Sea of Japan that brings out the melancholy in listeners. My anime buddy is really wanting to take a trip along that long shore soon with his camera but in his case, it's not too sad at all.


"Kanashimi Honsen Nihon Kai" peaked at No. 36 on Oricon and won a Gold Prize at the Japan Record Awards. It also got Mori an invitation to the 1981 Kohaku Utagassen. That particular show has been a touchstone in terms of my love for Japanese music but I can't quite remember her performance then, but I can imagine a lot of dry ice fog being pumped onto the stage when she sang it.
Posted by J-Canuck at 7:55 PM